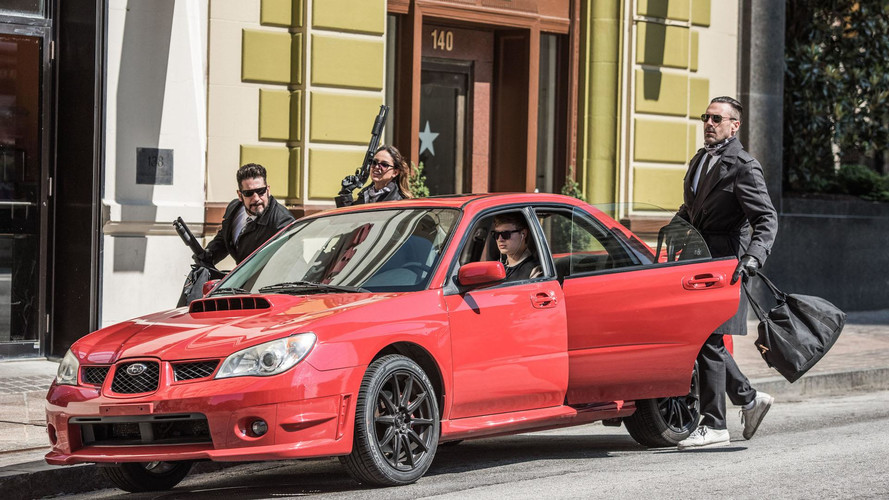 The Hollywood trio will cross the auction block on November 17.

What's that old saying, 'third time's a charm'? Well it's certainly appropriate here, because for the third time since the film's release little over a year ago a Baby Driver Subaru is up for sale.

This one, a rear-wheel-drive stunt car, in fact the rear-wheel drive stunt car – only one RWD car was made for the production out of the six Subarus used in total – has been up for sale before. The screen-used car sold for over £53,000 after an eBay auction which attracted 71 bids.

You Can Buy The Subaru WRX From Baby Driver

It's now up for auction again, but is only expected to fetch between £15,000-20,000 when it hits the auction block at The Prop Block auction in Henderson, Nevada on November 17.

The relatively small price for a film car (and a good film car from a great film, too might we add) is probably down to the poor condition of the car as a whole. Originally grey, the redone red paintwork is covered in scratches and chips, and the car has 156,477 miles on the clock – not to mention the huge amount of abuse the car will have been through as a stunt vehicle.

Also being sold at the auction will be a brace of Fast & Furious cars.

The 1972 'F-Bomb' Chevrolet Camaro from Fast & Furious (that's the fourth film) and the 'off-road' Camaro based on a 1967 model from Furious 7 are also up for sale.

The 'F-Bomb' is expected to go for between £30,000-40,000. The 5.7-litre V8-powered muscle car is said to be in good condition and comes complete with Mickey Thompson tires, full stunt regalia including the appropriate seats and a full roll cage.

Meanwhile the Furious 7 Camaro is expected to sell for as much as £93,000.

The car, driven by Tyrese Gibson's character, Roman Pearce in the 2015 film is powered by a 6.2-litre V8 engine putting out 530 bhp. Weirdly, the powerplant is mated to a two-speed gearbox, but remember it's a stunt car, so it is designed with a specific purpose in mind, and that purpose isn't commuting or driving to the shops.

It has a custom chassis, as well as a full roll cage, off-road racing shocks, four parachute brackets (don't try driving it out of a plane though), and racing seats.

Both of the Camaros were built by Fast & Furious car guru Dennis McCarthy.