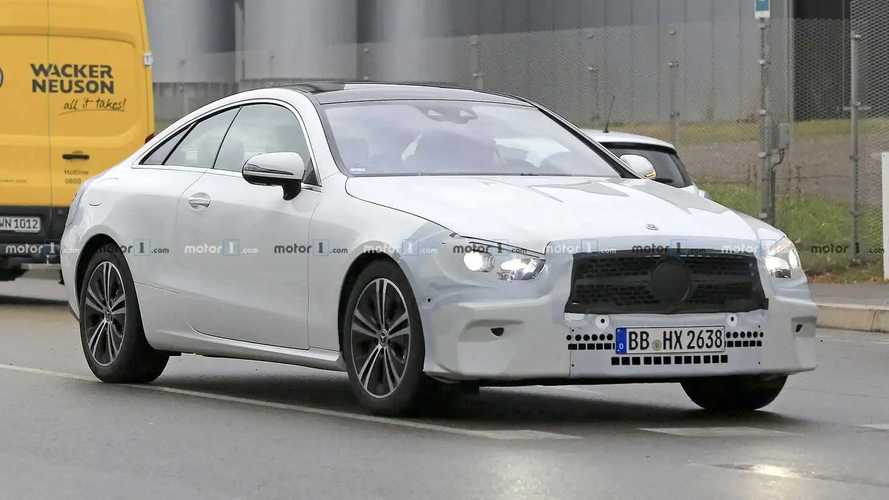 The front bumper has likely been modified as well.

Mercedes was first spotted testing a mild refresh for the E-Class lineup earlier this week when our spies caught on camera a lightly camouflaged prototype of the estate in the rugged All-Terrain specification. Fast forward to present day, the stylish coupe has been immortalized and it had disguise in the exact same places as the high-riding E-Class.

In both cases, the camo applied onto the body only conceals the front bumper and parts of the headlight and taillight clusters, so it’s safe to say the styling changes will be minor. Despite the makeup, it’s obvious the E-Class Coupe prototype has newly designed full-LED headlights with the turn signal light bar at the top like on other recently launched Mercedes models.

At the back, the small LED squares resemble those seen on the E-Class All-Terrain, but on the coupe these are slightly angled. If the look seems a bit familiar, it’s because the S-Class Coupe and Cabriolet in facelifted guise have a similar taillight design, so it makes sense Mercedes would want to bring the two-door E-Class models in line with the bigger cars.

Here are the taillights of the facelifted E-Class All-Terrain, E-Class Coupe, and S-Class Coupe models to better notice the common traits:

With this being the first sighting of the updated coupe, it might not have all the new bits and pieces since we could be dealing with an early prototype. However, we are not expecting any major changes taking into account the C-Class and S-Class lineups received minor cosmetic tweaks when the facelifted models came out.

If you won’t find the E-Class in Mercedes’ recently published product roadmap for 2019, which effectively means the facelift is not due to hit dealerships until 2020, although we might see it before the end of the decade. Chances are the sedan will be the first to come out, followed by the estate and then by the coupe and cabriolet body styles.

As far as the interior is concerned, we’re not holding our breath for the implementation of the new MBUX infotainment system. Earlier this year, Mercedes explained the C-Class didn’t get it because the car uses an older electrical architecture as the E-Class and S-Class. Considering the heavily related 2019 CLS also lacks MBUX, it will be a real surprise if the revised E-Class will ditch the Comand in favour of the new setup.