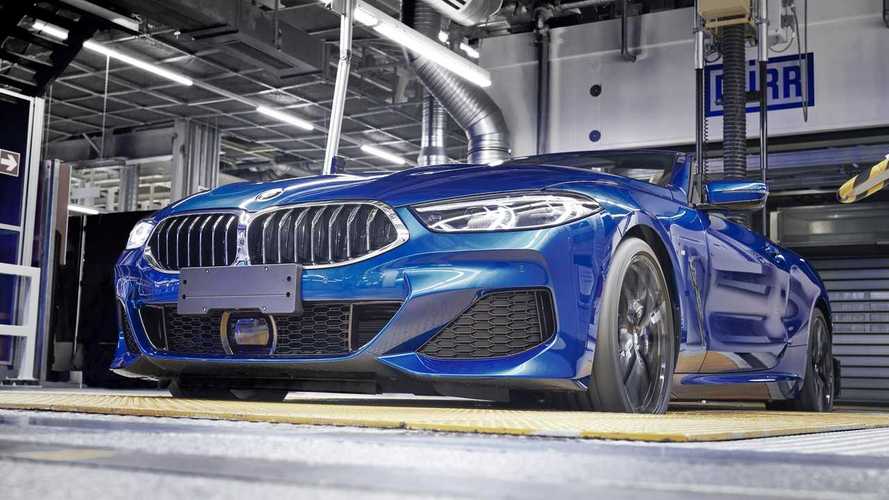 Featured here is the 840d packing a diesel engine, but there's also a V8 petrol unit for the M850i.

It was approximately four months ago when BMW pressed play on the 8 Series Coupe production button and now it’s doing the same for the equivalent Convertible. Replacing the defunct 6 Series Convertible, the large luxury droptop is being put together on the same assembly line as the 5 Series and 7 Series models at the factory in Dingolfing. It’s the place where 1,600 cars are produced each day from the 3, 4, 5, 6, 7 and 8 Series lineups.

The 8 Series models featured here in coupe and convertible shapes are the 840d variants equipped with an inline-six turbodiesel engine. As you probably know by now, the 3.0-litre unit delivers 316 bhp and 502 pound-feet of torque channeled exclusively to the xDrive all-wheel-drive system through an eight-speed Steptronic gearbox.

If diesels are not your cup of tea and you want something with more muscle feeding on petrol, you’ll have to step up to the M850i xDrive and its “completely redeveloped” twin-turbo 4.4-litre V8. The hotter 8 Series Convertible offers 523 bhp and a meaty 553 lb-ft, also sent to both axles via the eight-speed auto. These two powertrain versions of the resurrected 8er will be joined at some point next year by a higher specification of the V8 reserved to the M8 bound to be offered not only for the Coupe and Convertible, but also for the yet-to-be-revealed Gran Coupe.

All you need to know and see about the first soft-top 8 Series:

It’s worth mentioning the Dingolfing facility is one of BMW’s 30 global production sites and it’s the place where more than 376,000 cars rolled off the assembly lines last year. To prepare the factory for the trio of 8 Series body styles, BMW had to invest a “total amount in the low three-digit-million-euro range.”

The large plant currently employs roughly 18,000 people, plus 800 apprentices eager to learn how it’s done. Aside from assembling cars, the BMW Group Plant Dingolfing also manufactures components as well as the car bodies for all Rolls-Royce models.