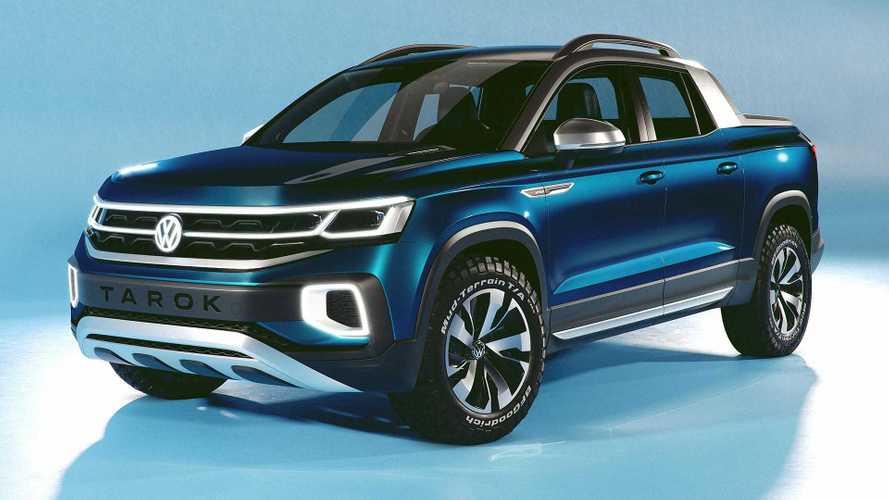 A panel at the rear of the cargo area opens to expand the room in the bed.

A week after teasing the highly adaptable pickup, Volkswagen officially unveils the Tarok Concept at the São Paulo International Motor Show. VW is quite clear that a production version of this truck is on the way, and the road-going model has "barely any changes" from what's on display here, according to the company.

The Tarok is stylish with abundant lighting up front, including illumination across the grille slats and surrounding the intakes in the lower fascia. A metallic finish for the C-pillar adds a contrasting flourish towards the back of the truck. The concept also features a panoramic sunroof. The taillights stretch across the entire rear end.

Inside, the surroundings are handsome but simple. The concept features modern amenities like a digital instrument panel and large infotainment screen. It's not clear whether the production version has this tech, though.

Where the Tarok Concept differentiates itself from most pickups is in the bed. The layout takes a cue from models like the old Chevrolet Avalanche by having an opening panel that can extend the cargo area into the cabin for hauling even more. The bed itself is 1,206-mm long, but folding the rear seats down and opening hatch extends the space to 1,861 mm. VW reports the Tarok's payload is around 1,000 kilograms.

The Tarok Concept uses a 1.4-litre turbocharged four-cylinder that makes 148 bhp. It can run on pure ethanol or on a petrol-ethanol blend. A six-speed automatic gearbox and all-wheel-drive system handle putting the power down. However, the production model will get a different powerplant because a 2.0-litre turbodiesel making 148 bhp will be the only mill available at launch.