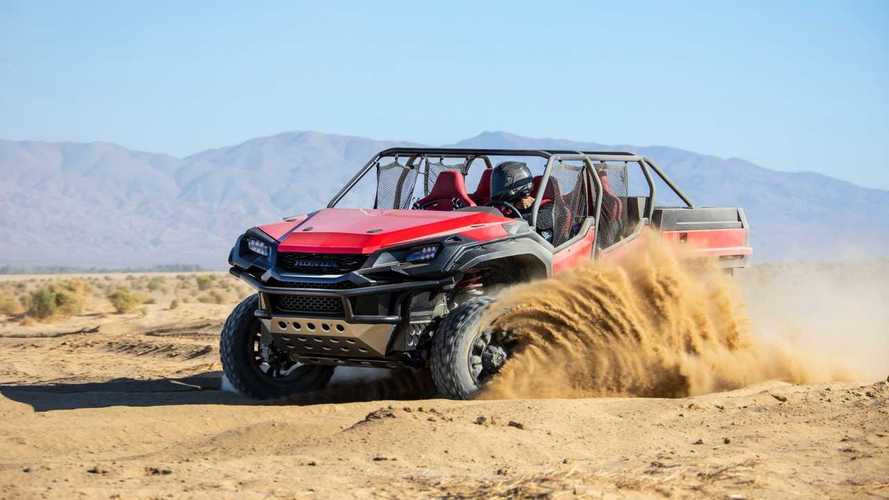 The capabilities of a truck combined with the fun of a side-by-side.

Dreaming of a vehicle that has all the capabilities of a light truck with the added fun of an open-air side-by-side UTV (utility task vehicle)? Honda has got you covered. This year at SEMA, the company pulled the sheet of what it calls the Rugged Open Air Vehicle concept. The company calls it a look at the "ultimate off-road Honda four-wheeled vehicle" – we just call it brilliant.

Up front, you might notice some familiar cues. The concept rides on a modified Ridgeline pickup truck body and suspension. Sold in North America only, Honda doesn’t hint at what powers it, but we’re hoping it’s the same 3.5-litre V6 from the production truck. A hearty 280 bhp atop this lightweight concept’s body would definitely make it quick. Other carryover features include Pioneer 1000 doors and a Pioneer steering wheel – even the modified bed and tailgate was inspired by the iconic side-by-side.

The cabin is scarce, but it does have a few features worth pointing out. The seats were ripped from the Honda Civic Type R and reskinned in Pioneer 1000 waterproof material. Two RAM mounts atop the dash were made for holding smartphones. And durable paint-on surfaces protect the exposed instrument panel from the elements. The Rugged concept was designed and built by Honda R&D Americas in Ohio, but don’t expect to see a production version anytime soon.

The Rugged Open Air concept joins a handful of Honda and Acura concepts at SEMA. On the Honda stand you’ll find vehicles like an overland-inspired Ridgeline, an Insight hybrid with Honda accessories, a race-inspired RDX with 345 bhp, and plenty more.

Headlining a star-studded lineup of vehicles, the Honda Rugged Open Air Vehicle concept took its bow today in the glittering environs of Las Vegas at the 2018 SEMA show. Combining elements of two production Honda vehicles from different genres, the Rugged Open Air Vehicle concept is based on Honda's Ridgeline pickup and its Pioneer 1000 side-by-side to create the ultimate open-air off-road Honda adventure vehicle.

Designed and developed by Honda R&D Americas, the Rugged Open Air Vehicle concept is a physical thought exercise of what the ultimate off-road Honda four-wheeled vehicle could look like. The vehicle combines the utility of the Honda Ridgeline with the off-road ruggedness and extreme styling of the Honda Pioneer 1000 side-by-side. While the Rugged Open Air Vehicle is a concept, it nonetheless uses existing Honda components, such as modified Ridgeline body and suspension, along with production Pioneer doors and custom designed bed and tailgate panels modeled after the Pioneer. The Ridgeline-based interior has been modified for a life exposed to the outdoors and features a Pioneer 1000 steering wheel adapted to the Ridgeline steering column, along with Civic Type R seats reskinned in waterproof Pioneer 1000 material, smartphone holders from RAM Mounts, and durable paint-on surfaces to protect the exposed instrument panel from the elements.