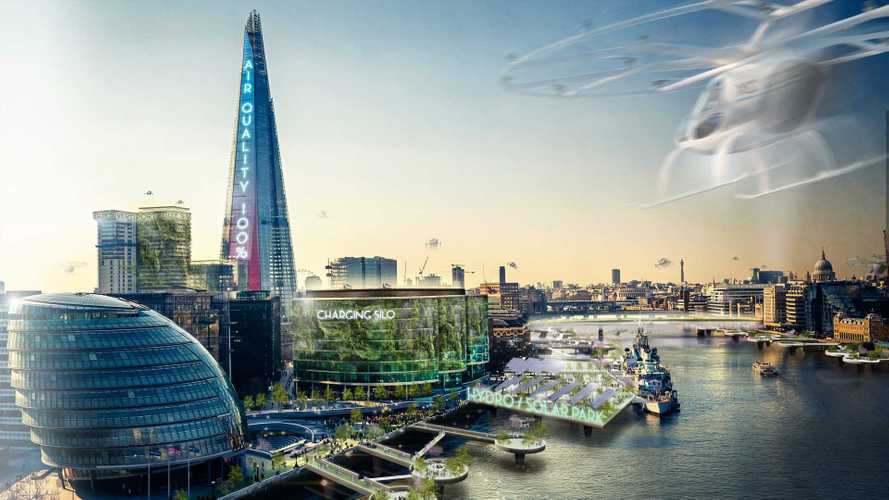 Could the country look like this in the coming years?

How do you solve a problem like... London? Well, Jaguar Land Rover and the Royal Institute of British Architects (RIBA) think they know how.

Jaguar's head designer Ian Callum is an honorary fellow of RIBA and he teamed up with award-winning architect Jon Eaglesham of Barr Gazetas to present a number of concepts depicting a joint-vision of an electrified vision of urban Britain.

When carmakers do buildings

"As a designer, I am hugely excited by the opportunity this widespread adoption of electric cars presents," said Callum. "We have a unique chance for wholesale change of the facilities available to drivers as we reinvent usage and ‘filling’ patterns for our vehicles. The concepts we are presenting here with the team of architects show a vision of what is possible, what is needed and what it could look like."

The present-day motorway services concept breathes new life into Forton services on the M6, which has been open since 1965. With electric cars bringing cleaner motorways, the concept envisages things like farm shops, gyms, and even swimming pools being added to cleaner, greener motorway services of the near futures.

Car parks were another mundane aspect of modern motoring tackled with the concepts. This concept was based on the car park on Welbeck Street in the West End of London that first opened in 1970.

Instead of a boring building that simply holds cars, the Jaguar/RIBA concept reimagines it into a self-sufficient charging hub for electric vehicles, using the pre-existing structural grid along with support solar photovoltaics panels to provide clean energy to charge electric cars.

The final concept doesn't focus on one building or area, but rather the entire city of London. The concept shows a cleaner, healthier city, with more green spaces and renewable power coming from solar and tidal sources.

"This study is all about realising opportunity. These four concepts should all be possible within a generation. Electric vehicle successes such as the I-PACE represent a huge catalyst for change," said London architecture practice Barr Gazetas’ managing director, Jon Eaglesham. "As architects, together with town planners and authorities national and local, we need to embrace this opportunity now, and bring visions such as these to reality, improving experiences, and indeed lives, up and down the country."