The high-performance crossover coupe was revealed only a year and a half ago.

Already preparing to get a nip and tuck? Yes, the GLC 63 Coupe was officially unveiled on the Internet in early April 2017, yet Mercedes-AMG has already been spotted out and about testing an updated version. While this might come as a surprise, it actually makes sense when you take into consideration the regular GLC / GLC Coupe will be going through their mid-cycle updates next year.

An official product roadmap we published yesterday had the two crossovers slated for a release in the first half of 2019. The folks from the three-pointed star company want all GLC flavours to feature the same updates, which is why the 63 and 63 S models are in a hurry to get a facelift to be in line with the others. 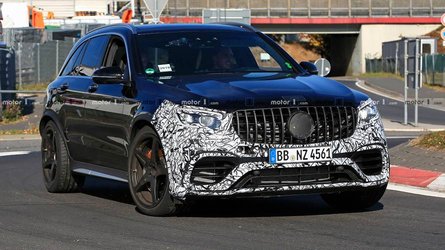 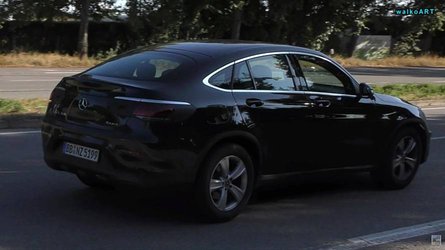 Don’t expect any major styling changes as the prototype was spotted carrying very little camouflage. Mercedes-AMG decided to mask the Panamericana front grille, but we’re not entirely sure it will actually be tweaked for the GLC 63 Coupe’s facelift. The front bumper’s design remains entirely hidden underneath the swirly camouflage pattern, while those cutouts could indicate the speedy crossover will get new air vents with a different shape.

The prototype’s rear end is a bit more interesting considering the partially covered LED taillights clearly have new graphics while the rear diffuser flanked by the quad exhaust tips seems to have been modified as well.

This fresh batch of spy shots doesn’t contain any images of the test vehicle’s cabin, but look no further than the GLC F-Cell to see the changes the 63 and all of the other versions will be going through. We’re referring to the digital instrument cluster, revised touchpad, and the larger infotainment system already implemented in the hydrogen-fuelled crossover.

Time will tell whether Mercedes will introduce the revised 63 models together with the lesser trims or we’ll have to wait a bit more. Regardless, the entire GLC range will be updated in 2019, with the obvious exception of the new F-Cell model.