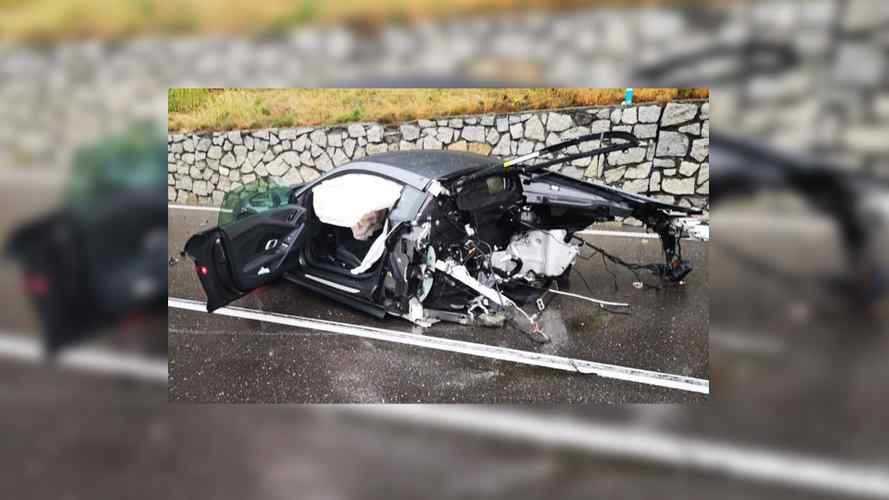 Yeah, that's definitely not buffing out.

This isn’t the first time we’ve seen crazy images of a car split in half, but the shock that comes from witnessing such carnage never dissipates. The amazing news here is nobody died or was even seriously injured in this mechanical massacre. The crash occurred a couple days ago in northern Italy, and as you can see from the images in this Facebook post, the damage to the Audi R8 is extensive to say the least.

Specifically, the collision happened on a wet stretch of road between the towns of Latsch and Kastelbell, not too far south of the Austrian border. The details of the crash aren’t known, but it does involve a Volkswagen van which can be seen in a few photos with damage to its front clip. If we had to guess (and we do), we’d say the R8 was quite sideways and travelling with some speed when the VW smacked it in just the right place. It’s also possible the van was out-of-control and impacted the Audi, but whoever goofed up, it's safe to say considerable speed and a lack of control led to a very hard hit. According to the Facebook post, the R8 driver actually climbed out of the car nearly unhurt. The VW driver had minor injuries as well; both were taken to a nearby hospital.

McLaren Senna crashes into wall in Munich shortly after delivery
⠀

Ferrari FXX Evo crash at Monza is painful to watch

Looking through the photos, the R8’s cockpit remained amazingly intact considering the forces at work were strong enough to literally tear the car in two. The road looks properly soaked to the gills, and the cleanup from the crash reportedly took quite a few hours since debris and fluids were all over the place. One photo actually shows a street sweeper being called into action, and the irony of that rather hilarious picture of the bloke on the side of it is not lost on us. Hey, you gotta find the good in every situation, right?

As always, we’re very glad nobody was seriously hurt because it could’ve been so much worse. Stay safe out there friends.