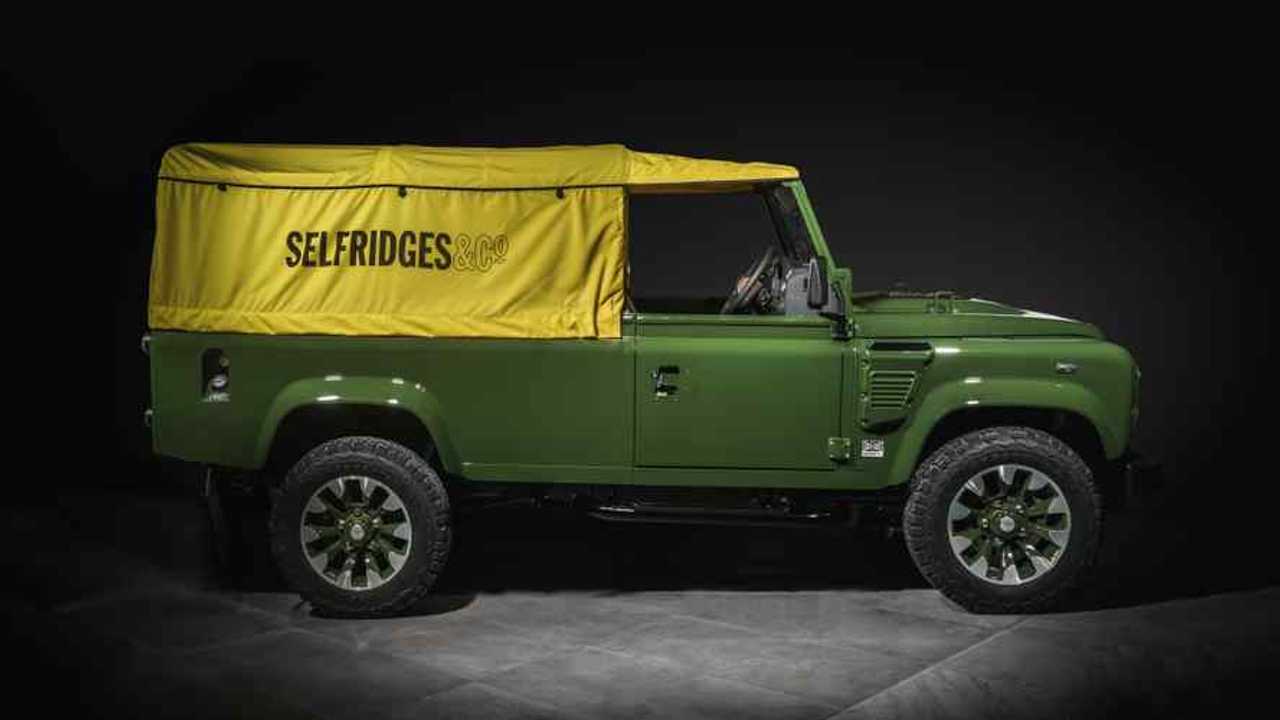 It was built in store.

Selfridges in London will now play host to a special one-off Land Rover built just for the department store in the capital.

The big car arrived at the famed store in bits, and had to be reassembled on the menswear floor after it was craned in through a window in bits. Three specialist Land Rover Classic technicians assembled the kit of parts, turning it into a 400 bhp Defender Works V8 – 70th Edition. Before it was turned into the V8 restomod, the Selfridges Edition Land Rover was actually a moderately less exciting Defender 110 2.2 TDCi Pick Up in Coventry nearly five months ago.

So what sets this Land Rover apart from others, besides the fact it resides in a department store and took 930 hours to complete? Well, there's a number of special touches, like Bronze Green paint, a branded hood in trademark Selfridges yellow, retro-style seats with custom stitching, and unique Selfridges badging.

"Everything on this car, from the custom cross-stitched leather to the unique Selfridges hood and Works V8 Conversion, has been created at our state-of-the-art Classic Works facility in Coventry," said Jaguar Land Rover Classic Director, Tim Hannig. "This may be the most quickly-assembled one-off Defender in the world, but it will be on display at Selfridges in London long enough for customers to enjoy."

The car is something of a joint birthday present for both Land Rover and Selfridges. Land Rover is currently celebrating its 70th birthday, while the department store will turn 110 next year. The London store on Oxford Street first opened in 1909, two years after company founder Harry Gordon Selfridge arrived in Britain from the United States.

"In a pioneering moment for both Selfridges and Land Rover, this one-of-a-kind automotive was created especially for the store’s new Men’s Designer Street Room," said Sebastian Manes, Buying and Merchandising Director, Selfridges. "The Defender will act as a platform for our art and fashion partners and is a key feature within this dynamic space. We are so excited to have worked on this collaboration together, in an ongoing relationship that will celebrate creativity and design in an unexpected way."

If you want to check out a car that can't be driven, unless you want to break some windows and ruin some carpets, head to the Designer Street Room at Selfridges’ flagship department store in London.