The crash damaged or destroyed three Land Rovers and a Jaguar on top of the car carrier.

When you're driving a big truck, it's important to be aware of the vehicle's height and be careful of any low-hanging obstacles. A car transporter driver in Perth, Scotland, briefly forgot this important axiom and slashed the roof off a Land Rover Range Rover Sport when attempting to drive under a railway bridge.

In addition to scalping a Range Rover Sport, the crash also damaged two other Range Rovers and a Jaguar F-Pace when they scraped across the roof of the railway bridge, according to The Courier newspaper.

More Crashes To Check Out: 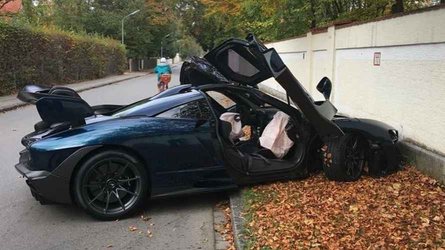 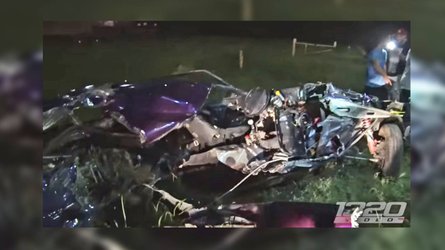 Ford Mustang Ripped In Half During Crazy Street Race Crash

It took around an hour to clean up the damage, and Network Rail inspectors responded to the scene to make sure the bridge was still safe to use. The incident happened during morning rush hour which caused traffic to back up. Plus, trains were only able to travel at five miles per hour until railway officials announced there was no damage to the bridge. They joked about the incident on Twitter (below).

Jaguar Land Rover might want to revaluate its method of hauling luxury SUVs around the United Kingdom because this is the second case of ripping the roof off one its models this year. In April, a Range Rover Velar was on the back of a car hauler when the truck tried go under a bridge near Farnworth, England. The incident damaged a Range Rover Evoque, too. Police found that the driver forgot to lower the top deck after making a delivery to a dealership.

Land Rover has been building rugged vehicles for decades, but the firm hasn't made one yet that was able to handle a high-speed run into a sturdy, stone structure.