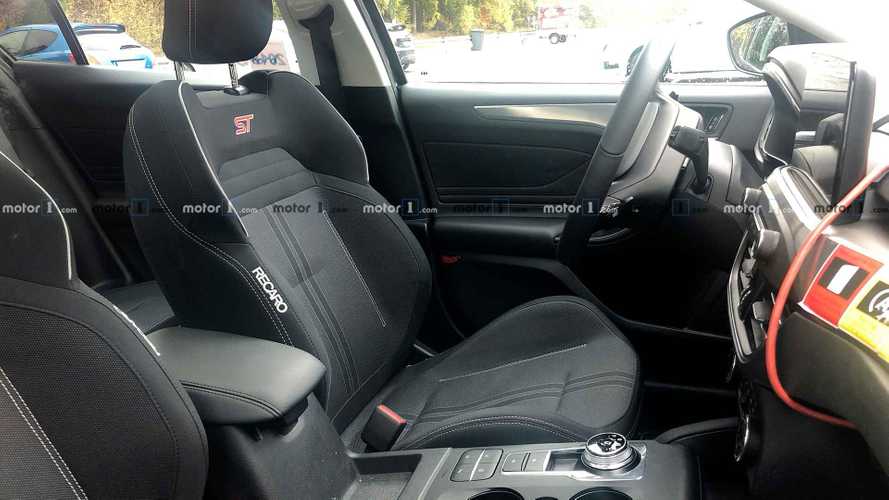 My those are nice Recaros you have.

We recently caught a good look at the refreshed Ford Focus ST that’s in the works, but today our spy photographers got an up-close look at what’s new on the inside of this hot hatchback. There’s certainly no mistaking this for the ST model, especially since we see ST clearly embroidered on the Recaro seats. It appears the interior won’t be a massive departure from the current model, though the centre stack is completely revised. We also know an automatic is coming, which is clearly seen here with the lack of a manual lever for swapping cogs.

Next Ford Focus ST spied undisguised and towing a trailer

Similarly, the exterior updates will be noticeable, but not an extreme departure from the familiar formula that Ford Focus fans already love. As is the trend with many current performance vehicles, the ST sports an edgier overall look with larger intakes up front. There’s a big wing at the back too, but for the most part it doesn’t rock the boat in Ford’s portfolio.

Some mystery still remains as to what might grace the ST under its bonnet. Some sources say the existing 2.0-litre turbocharged four-pot will remain, possibly tweaked to upwards of 270 bhp driving just the front wheels. We’ve also heard that a massaged version of the Fiesta ST’s 1.5-litre engine could get promoted to Focus duty. One thing that seems certain is the mighty 2.3-litre mill from the Focus RS won’t be part of the equation.

Also out of the Focus ST’s equation is a North American appearance. By now everyone knows Ford has decided to stop selling cars in the States, hoping instead to reap glorious profits from the pickup and SUV cash cow while pretty much abandoning all other segments. Sadly, it seems history is doomed to repeat itself with Euro and Asian markets getting cool Blue Oval hatchbacks that are forbidden fruit for American enthusiasts.