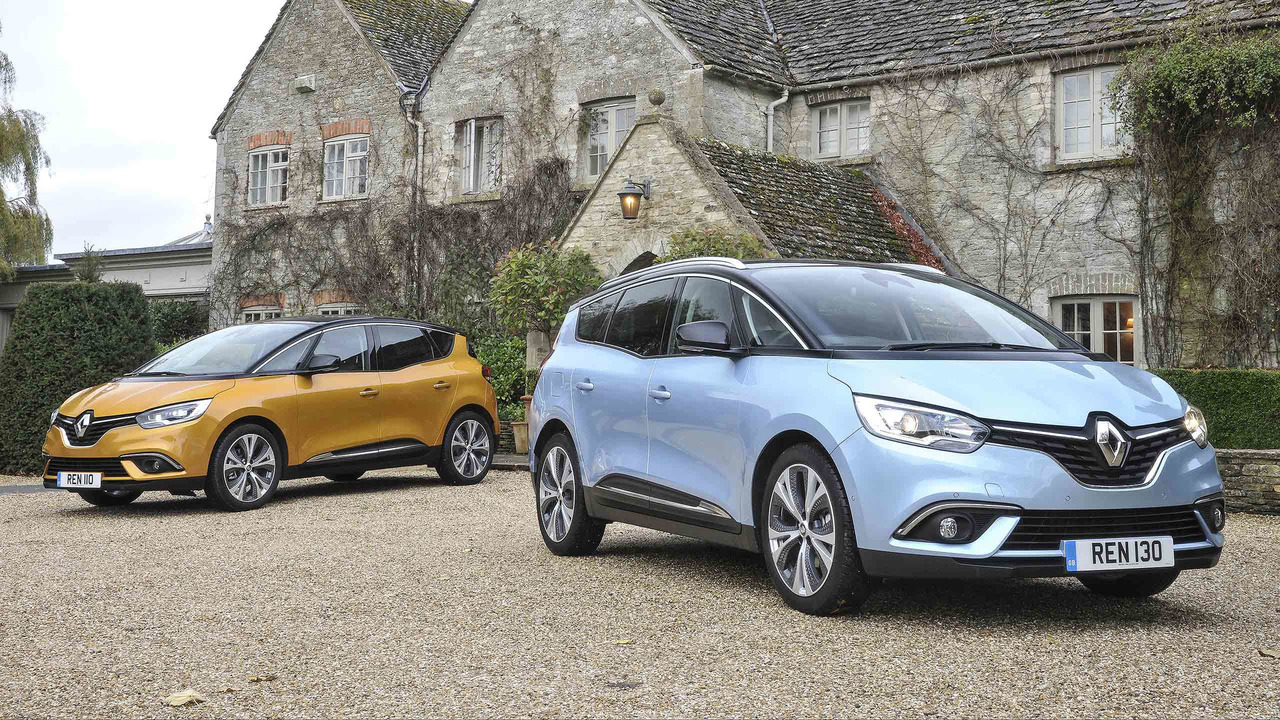 Scenics and Grand Scenics are now £620 cheaper, while the Koleos has dropped £550 from its price tag.

Renault has cut the price of its Scenic and Grand Scenic MPVs, as well as the Koleos SUV as part of a new-look model line-up.

Under the French brand’s EasyLife scheme, which is already seen on the Clio, Captur and Megane ranges, the Scenic and Grand Scenic’s four-trim range has been cut back to three, while the starting price has fallen by £620 in both cases.

The five-seat Scenic and seven-seat Grand Scenic’s respective £21,390 and £23,190 price tags buy you the new Play trim level, which has replaced the Expression+ model.

The equipment included, however, is broadly similar, with 20-inch alloy wheels, a seven-inch touchscreen and climate control all featuring. Rear parking sensors have been added, though, and there’s new smartphone connectivity software in the shape of Apple CarPlay and Android Auto.

Sitting in the middle of the new range is the Iconic trim level, which Renault says describes as “similar” to the outgoing Dynamique Nav trim. Priced from £22,690 in the Scenic and £24,490 in the Grand Scenic, Iconic-spec cars get front and rear parking sensors as standard, as well as tinted windows and Renault’s R-Link2 infotainment system, complete with satellite navigation and USB charging ports for rear passengers.

Finally, the new range-topping model is the Signature, which adds a head-up display, larger 8.7-inch touchscreen, and leather seats. A panoramic sunroof also makes the cut in a model that costs £24,290 in Scenic models and £26,090 in Grand Scenic guise – £1,220 cheaper than the model it replaces.

Under the bonnet, customers will get a simple choice of two engines. The 1.3-litre turbocharged petrol engine serves up 138 bhp and returns 47.1 mpg when fitted in the Scenic, although the larger Grand Scenic will only manage 45.6 mpg.

The alternative is a 1.5-litre diesel with 118 bhp, which offers economy of up to 57.7 mpg regardless of whether it powers the Scenic or Grand Scenic.

While Renault has been busy streamlining its MPV line-ups, it hasn’t forgotten the Koleos – a seven-seat 4x4 that shares much with the Nissan X-Trail.

Like the Scenic and Grand Scenic, the Koleos has lost a trim level, with just two versions now available to customers.

The ‘entry-level’ variant is the Iconic model, which starts at £27,495 – £550 less than the previous version. Standard kit includes a reversing camera with front and rear parking sensors, a blind-spot monitoring system and climate control, while part-leather seats, automatic headlights and satellite navigation also feature.

Spending another £2,000, though, will buy you the GT Line model, which Renault calls “the pinnacle” of its passenger car range. Kitted out with LED headlights and full leather upholstery, the car also benefits from heated front seats, an automatic tailgate and a larger touchscreen.

Both versions, though, get an automatic gearbox as standard, while power comes from a 2-litre diesel engine that churns out 173 bhp, although customers do get the choice of two- or four-wheel drive. The two-wheel-drive versions will return 45.6 mpg, but the four-wheel-drive cars – which cost £2,000 more – can only return 44.1 mpg.

The new Scenic and Grand Scenic ranges are already available, but the first customer deliveries of the new Koleos range will not begin until next month.