It's only our second look at Germany's new super SUV.

Here’s something a bit different for your Saturday – a future Mercedes-Benz SUV spied testing on the road. That’s not different you say? Look closer, because this big GLS-Class doesn’t appear to be the standard-issue people mover. There’s plenty of evidence to believe this is the hot AMG version, which we’ve only seen once before in our log of Merc spy shots.

More about the new GLS-Class: 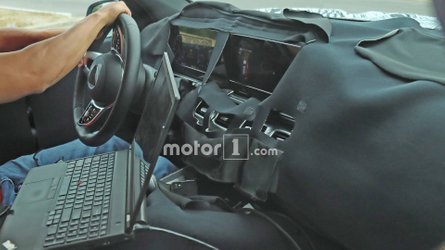 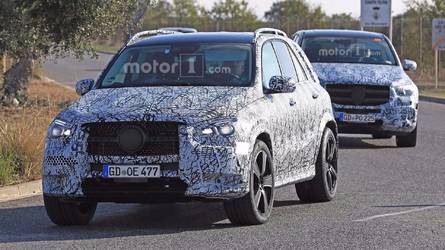 We’re only graced with a short video (above) and a few screengrabs from it, but the giveaway comes in the form of the heavy camouflage over the grille. Mercedes isn’t as concerned about hiding the face on its standard GLS-Class, but the hotter GLS 63 still conceals the Panamericana grille. The lower fascia is also different, incorporating a series of openings instead of a single lower intake vent. There could also be additional sculpting to the AMG-spec SUV on the corners of the front clip for a more aggressive look.

These changes on the front are all different from the last (and only) look we had of the AMG model (see the gallery below), suggesting this could be a production-spec front clip. What’s not different, however, is the lack of side steps along the sides of the SUV. It’s possible the GLS 63 will use a powered step, or go without any step at all since it will likely ride a bit lower than the standard model.

We’ve glimpsed the interior of the standard GLS, and we fully expect it to receive the full glass cockpit treatment and new MBUX system seen on other Mercs. Since it will compete directly with BMW’s new X7, there should be all kinds of safety/convenience tech onboard, not to mention autonomous capability. With the GLS 63 expected to wield more than 600 bhp from a 4.0-litre twin-turbo V8, however, most drivers will likely be more interested in being an active participant. Most of the time anyway.

When will we see the new full-size AMG SUV? We need to see the standard GLS-Class first, and that should happen fairly soon since it’s expected to go on sale next year. A GLS-Class reveal could happen in a few weeks at the Los Angeles Auto Show, or a few weeks after that in Detroit to kick off 2019.