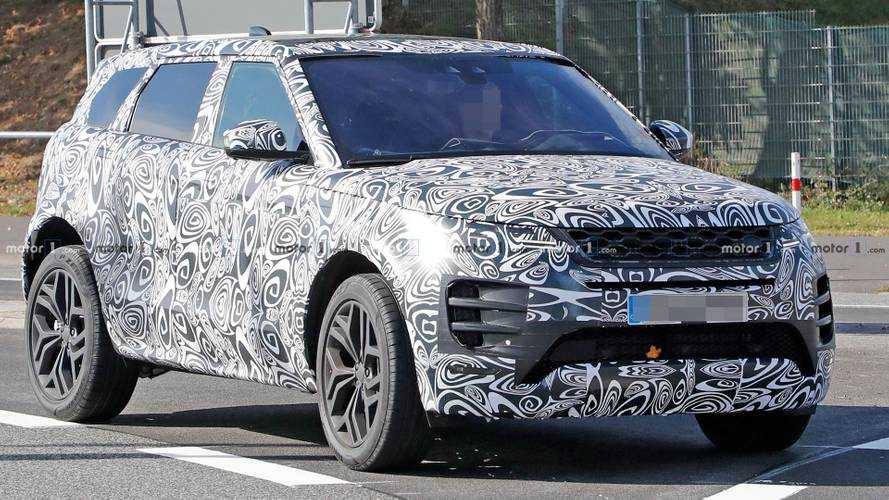 The new Evoque takes styling cues from the larger Velar.

The next-gen Land Rover Range Rover Evoque continues its development around the Nurburgring, and the stylish SUV now strips off some camouflage in these new spy shots. There’s a great look at the cabin, too.

Take a closer look at the next Evoque:

Unlike earlier test mules, Land Rover’s engineers remove some of the concealment from the front end. This allows us to see the large corner intakes and double-decker grille. Camo still hides a little of the headlights, but they’re visible enough to identify them as quite skinny. Looking at the side, there are hidden door handles, too. These elements take the overall aesthetic from the larger Velar and tweak them to work on the smaller model.

The spies caught the Evoque’s interior with most of the concealment pieces out of the way. The SUV adopts a digital instrument panel, and the 4,800 rpm redline on this one hints that there's probably a diesel engine under the bonnet. Where most automakers put their infotainment screens at the top of the centre stack, Land Rover goes for a different layout by having the HVAC vents on top and placing the display underneath them. The other digital screens are likely for controlling the HVAC system.

The updated Evoque will ride on a revised version of the existing platform. The tweaks will allow for a wider track and longer wheelbase. Eventually, it will also support a plug-in hybrid powertrain that will pair a 1.5-litre three-cylinder and electric motor.

So far, we have only seen the new Evoque in a five-door layout. It's still possible that the SUV could get a convertible variant, but the droptop doesn't appear to be part of the range at launch. Look for the next-gen Evoque to premiere in 2019.