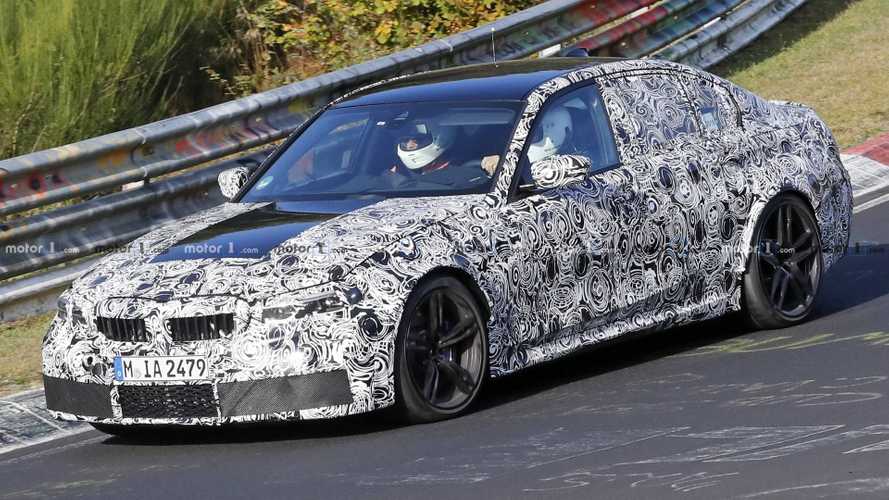 It's our best look so far.

BMW unveiled the seventh-generation 3 Series Saloon just last week in Paris, with 320i and 330i models available at launch alongside the diesel-fuelled 318d, 320d / 320d xDrive, and 330d. In the U.S. the hotter M340i xDrive was also detailed and featured in many photos and videos, but it won’t be added to the range until next summer. For those willing to wait even more and pay what will definitely be a significant premium, the M3 will offer performance on an entirely different level.

It has been spotted once again doing its thing at the Nürburgring (where else?), and this one appeared to be a more evolved prototype since it had the production-spec LED headlights. As you might recall, previous test vehicles had those rather ungainly temporary clusters with old-fashioned bulbs not worthy of a full-blown M car.

Those annoying small rivets can still be seen on the car’s body, holding in place extra layers of disguise to better conceal the M3’s actual design. Nevertheless, it’s easy to notice the fat wheel arches at both the front and rear axles indicating the sports saloon will get wider tracks. At the back, there’s a subtle boot lid spoiler and a not-so-subtle quad exhaust system typical of an M car, but not the final setup.

Having seen the aforementioned M340i as well as the cornucopia of tailor-made M Performance parts, we don’t need a crystal ball to see into the future of the M3. We also have some preliminary details (albeit unconfirmed) about the oily bits, with power expected to come from a new inline-six 3.0-litre engine packing a twin-turbo setup. It will allegedly produce roughly 450 bhp in its standard configuration, with an amped-up version expected to unlock in excess of 500 bhp for the X3 M and X4 M fitted with an optional Competition Package. It should be a similar story with the M3 seeing as how it will borrow the S58 engine from the first full-fat M versions of the X3 and X4 crossovers.

It’s too early to know for sure when BMW will introduce the M3, but we wouldn’t count on seeing it for at least another six months from now.