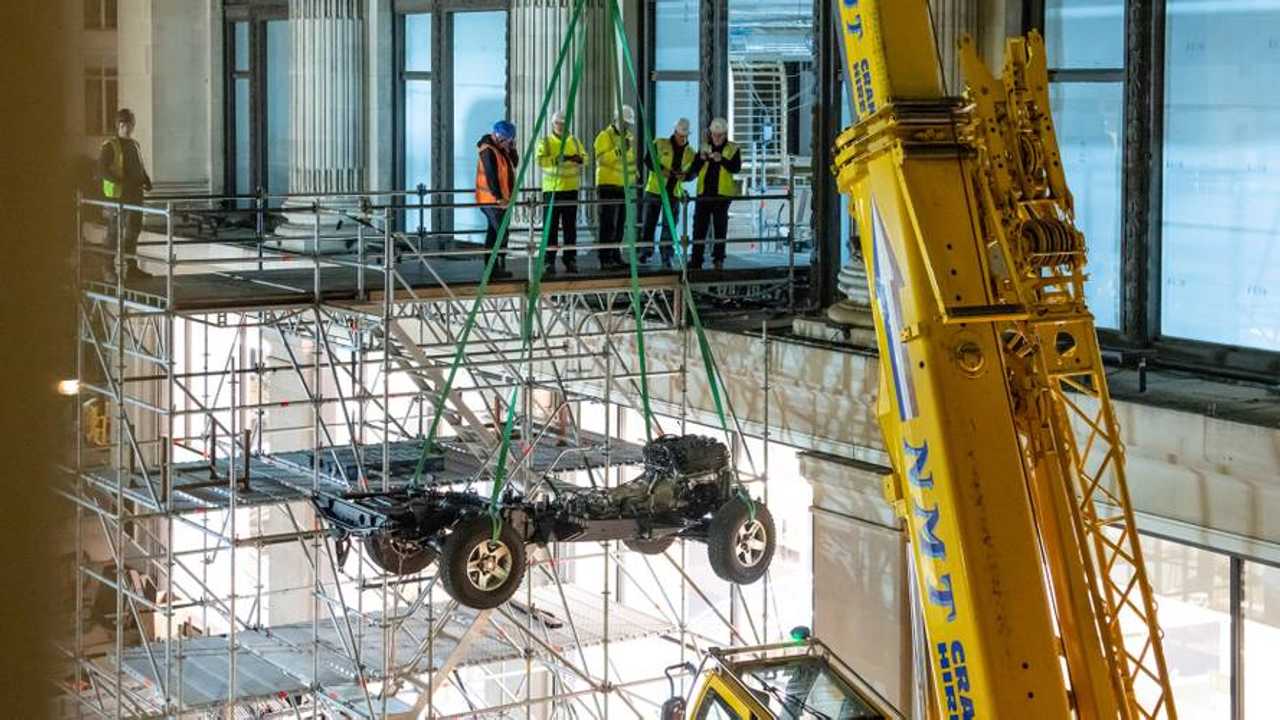 When completed, the car will form the centrepiece of the new Selfridges’ flagship store on Oxford Street, in central London.

More on the iconic Defender...

The vehicle – a unique “Selfridges’ Edition” version of the Defender Works V8 110 Soft Top – will go on display in the menswear department when the shop opens on October 29.

Construction of the vehicle has already begun with the chassis being rolled in through a first-floor window. Building the rest of the car around that base will take four days in total.

When finished, the car will wear a Bronze Green colour scheme with a Selfridges’-branded yellow hood. A heritage-style folding windscreen will also be fitted, along with ‘half-height’ doors, giving the vehicle an open-air look.

Inside, the period-style seats will be finished in chocolate leather upholstery with ivory cross-stitching, while the dashboard will be adorned with a Jaguar Land Rover Classic infotainment system with satellite navigation, DAB radio and Bluetooth connectivity in a “classically styled head unit”.

One of Land Rover’s Shadowy teaser images also shows a wood-lined load bed with benches over the rear wheel arches.

Like any other Works V8 model, though, the Selfridges’ Edition will get a 400 bhp V8 engine. A 5-litre unit, it shares much with the supercharged V8 found in the Jaguar F-Type SVR and Range Rover Sport SVR, albeit without the supercharger.

The Works V8 cars also get an eight-speed automatic gearbox, as well as uprated brakes and suspension, which is designed to give the car a sporty feel that’s better suited to the powerful engine.

As a result, Land Rover says the Works V8 models are the fastest and most powerful Defender variants ever produced, with short-wheelbase ‘90’ versions sprinting from 0-62 mph in 5.6 seconds despite their all-terrain tyres.

Tim Hannig, Jaguar Land Rover Classic’s director, said: “Our skilled engineers and craftsmen can tailor vehicles to meet any request, from applying unique paintwork or interior trim to delivering far-reaching mechanical enhancements. The Selfridges Edition shows what can be achieved and we can’t wait to see it take pride of place in the famous department store.”

Although the Defender is still an iconic vehicle for Land Rover, it has now gone out of mass production, with a mere handful of special-edition V8 cars providing the final swansong when they were announced last year.

Spy images suggest that a replacement is in the pipeline, but as yet, Land Rover has not officially confirmed when it will arrive.