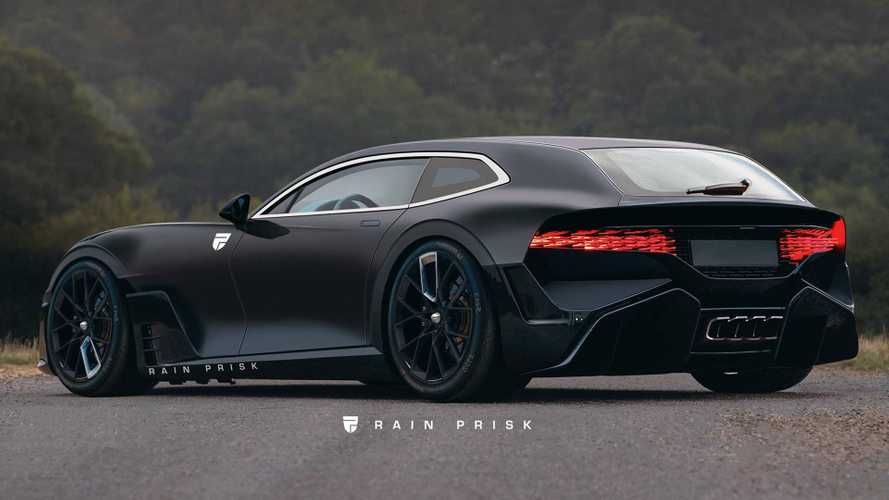 The Bugatti Divo is excellent. It has the looks, speed, and performance to shut up the competition. However, for everything it does have, it lacks something that could keep it out of garages around the world. It’s not the €5 million (£4.43 million) price tag, nor the fact all 40 examples already sold are the issue here. It’s the lack of practicality. Or at least that’s what I think. But a new Bugatti rendering from Rain Prisk fixes that problem by turning the Divo coupe into a Divo shooting brake.

Bugatti has to perform major surgery to turn the Divo into a proper shooting brake. The Divo is a mid-engined car with the powerful engine sitting behind the cabin. To make room for added storage and elongated roof, the engine has to move to the front. You can see in the rendering how the front end is longer than your standard Divo, making room for the W16 engine and its 1,500 horsepower.

Bugatti has more in store for fans:

The elongated shape doesn’t distract from the Divo’s distinct design cues. The car looks sleek and powerful without looking awkward. The iconic C-Shaped swoosh around the doors is gone, but its absence gives the car a cleaner look – one that doesn’t appear so audacious. It looks perfect for everyday driving. The extended roof means the large rear wing has gone, even though much of the rear-end design from the Divo coupe remains.

Sadly, this is just a rendering. While there are rumours of a four-door Bugatti swirling around, and an SUV rendering that previews the inevitable, a shooting brake feels like the least likely new body style to happen. That doesn’t mean I wouldn’t praise such a creation. Keep performance the same as your standard Divo, and all 40 examples will sell before the car is revealed to the public.