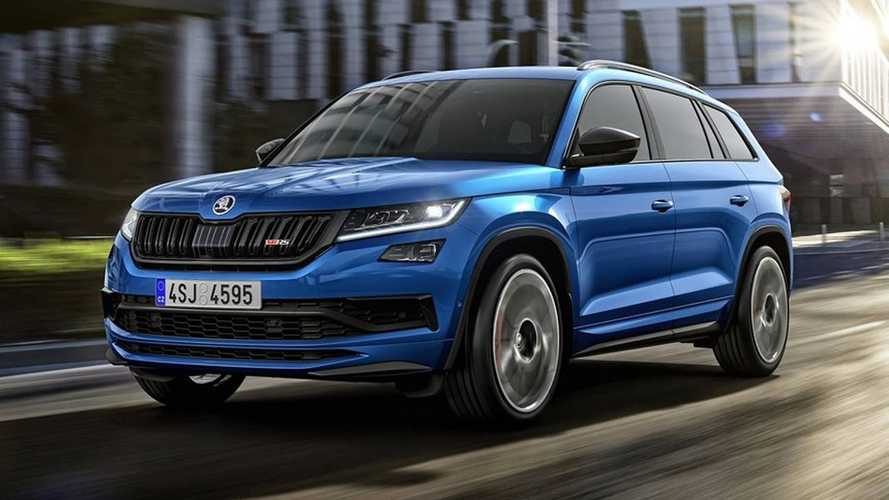 The fastest seven-seat SUV at the Nurburgring has arrived.

After a painstakingly long teaser campaign, the Skoda Kodiaq RS finally shows it all courtesy of a few leaked official images prior to the debut scheduled for tomorrow. Someone eager to show the entire world the first RS-badged SUV from Mladá Boleslav published a few fully revealing shots of the big bear with its new RS logo, 20-inch alloy wheels, and a couple of fat exhaust tips.

Here are the latest teasers:

Having seen a plethora of teaser images, the reveal images aren’t exactly surprising, but it’s nice to finally check out the Kodiaq RS in all of its seven-seat SUV glory with all of the go-faster bits in place. To be honest, it doesn’t look significantly more aggressive than the Kodiaq Sportline, which some would say is a bit of a disappointment.

But don’t let the familiar looks trick you into believing this is merely a variation of the Sportline as the RS comes with a multitude of hardware upgrades. For starters, it’s powered by a twin-turbo 2.0-litre diesel engine producing 236 bhp and has been fitted with bigger brakes to match the upgraded powertrain.

The speedy Kodiaq will also benefit from an extended array of standard equipment, ranging from full-LED headlights and a digital instrument cluster to all-wheel drive. Representing a first for a Skoda, the Kodiaq RS will feature a Dynamic Sound Boost system that’ll artificially enhance the engine’s soundtrack based on the chosen driving mode.

The Kodiaq RS will receive its premiere tomorrow during the first press day of the 2018 Paris Motor Show, but Skoda is organising a sneak preview tonight when we might get to see more of the fastest seven-seat SUV at the Nürburgring.