Corvette prototype catches some air at the The 'Ring 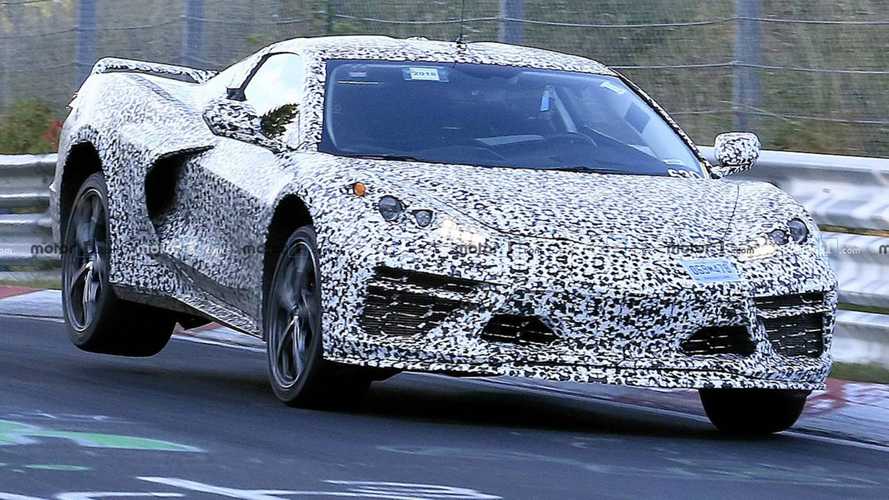 Latest spy images show three prototypes of the C8 at the Green Hell.

Once elusive, the mid-engined Chevrolet Corvette is now a common sighting among our spy photographers temporarily based at the Nürburgring in Germany. Prototypes are in an advanced testing phase taking into account the cars appear to have the production bodies or at least most of the final bodywork. No less than three test vehicles were spotted the other day, with one of them being accompanied by a current-generation ‘Vette.

Seeing the C7 and C8 together in the same image is a great opportunity to observe how the styling will dramatically change as a result of switching to a mid-engine layout. The new-generation Corvette has significantly wider hips and massive air intakes on the sides to provide cooling for the engine. Chevy doesn’t want us to see the powertrain just yet, deciding to black out the rear glass and the louvers flanking it.

The engine positioned behind the seats remains a mystery at this point, but rumours suggest the company with the bowtie emblem is working on three powertrains. The entry-level model will allegedly feature the current 6.2-litre V8 with 460 bhp on tap, followed by the midrange twin-turbo 4.2-litre V8 with 650 bhp and a larger twin-turbo 5.5-litre V8 developing as much as 850 bhp.

A recent spy video showing a prototype going through the gears rapidly indicates Chevy has plans to offer the C8 with a dual-clutch automatic transmission as per rumours of a Tremec-supplied DCT. That being said, one mustn’t rule out the possibility of an updated version of the current eight-speed automatic and also the Camaro’s 10-speed ‘box.

Rumoured for decades, it looks like the mid-engined Corvette is finally happening and it will come along with a race car equivalent in the form of the new C8.R. Production of the road car is rumoured to kick off in about a year from now following a possible debut at the Detroit Auto Show in January 2019 with the yet-to-be-confirmed “Zora” moniker.