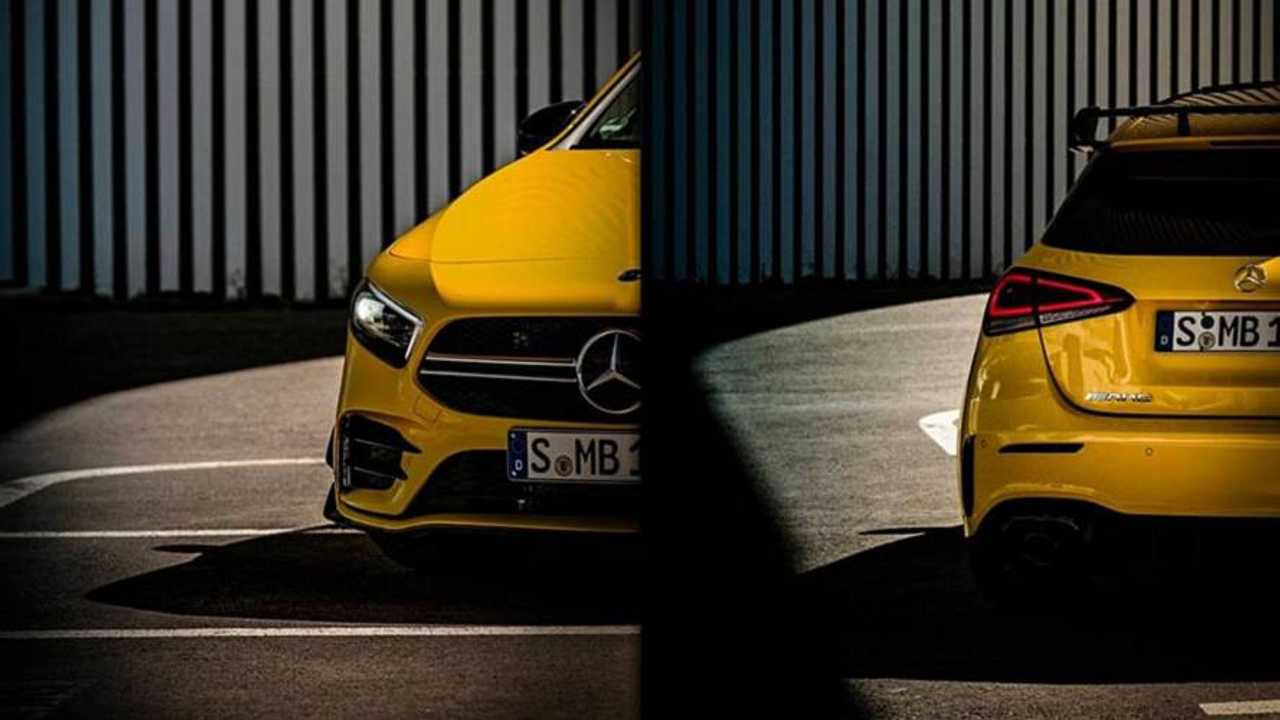 The teasing game never stops at Mercedes and that’s because the three-pointed star has a vast portfolio. The all-new GLE made its debut only a few days ago and already we have a great deal of teaser images previewing the next premiere. It’s a new addition to the family and will diversify the A-Class lineup by serving as a sportier alternative to the A250 / A250 4Matic but not as expensive as the A45 range topper.

Watch Mercedes-AMG A35 go all out at the Green Hell
⠀

Mercedes-AMG A35 Spied Hustling Around The Nürburgring

The annoyingly vertical teaser images released on social media provide us with a better look at the Mercedes-AMG A35, which much like the top dog in the A-Class family, will be offered exclusively with all-wheel drive. The lively yellow shade – likely Solar Beam Yellow Metallic – looks good on the hot hatchback’s body, which is already showing its beefy air intakes and prominent rear wing.

As you’d come to expect from an AMG model, the A35 is set to feature the familiar twin-blade radiator grille, while the A45 and A45 S will be immediately recognisable thanks to the Panamericana grille. Only one round exhaust tip is visible in the adjacent teaser, but we know for a fact there’s another one on the other side of the rear bumper, with the two flanking the model-exclusive diffuser.

We’re not expecting any major changes inside the cabin, although Mercedes-AMG will likely install new seats with better lateral support. The illuminated “AMG” lettering on the side sills is already visible in one of the teasers, and there should be some other changes to reflect it’s not a run-of-the-mill A-Class model.

At the heart of the Mercedes-AMG A35 will be a turbocharged 2.0-litre engine with a little over 300 horsepower channelled to both axles likely through a seven-speed, dual-clutch automatic transmission. A stiffer suspension setup should be on the list of upgrades, along with bigger brakes, and chassis tweaks.

Expect the full reveal to take place in the coming days, ahead of the public debut programmed for early next month at the Paris Motor Show.