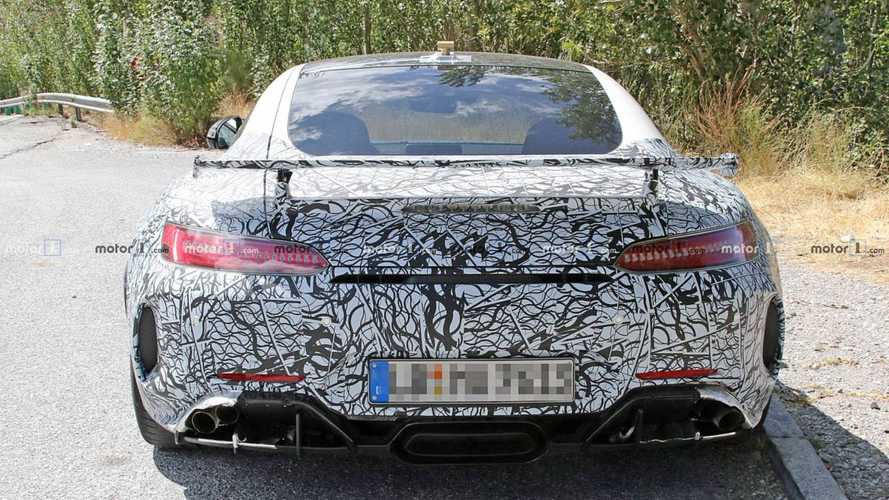 Could the new exhaust be a part of the upcoming Clubsport package?

It’s a known fact by now that Mercedes-AMG is hard at work prepping a refresh for the entire two-door GT lineup. We know for a fact the R will spawn a roadster version as per a batch of spy shots published nearly a month ago. The lesser versions of the range are about to receive a nip and tuck, but the most interesting changes will occur at the top of the food chain.

Another prototype was spotted recently with the same exhaust

Coming later this year quite possibly, the GT R will be available with an optional Clubsport Package set to bring an assortment of upgrades. A bit lighter than the regular R, the new flavour of the high-performance coupe might gain some muscle to hit the 600-hp sweet spot and will go through some other tweaks to make it even more track-ready.

It looks like one of the novelties Mercedes has in tow is a different exhaust system with stacked dual tips on each corner of the rear bumper in the same vein as Lexus is doing with its hot F-badged cars. It seems the prototype had the R’s regular diffuser, but with the vertical fins chopped off to make room for the exhaust finishers. The hexagonal-shaped central exhaust might look like it’s still there, but you can see it’s actually blocked off.

The rest of the car looks virtually the same as the GT R available in showrooms today. We have a feeling the prototype lacked many of the bits and pieces of the Clubsport Package, while that rear diffuser will likely be replaced by a new setup to neatly integrate the exhaust. Speaking of which, our spies have informed us the test vehicle was a bit louder than the regular GT R.

Let’s keep in mind Mercedes-AMG is also working on a Black Series model, but that won’t come out until 2020. Meanwhile, expect the base, S, C, and R models to be updated in the months to come.