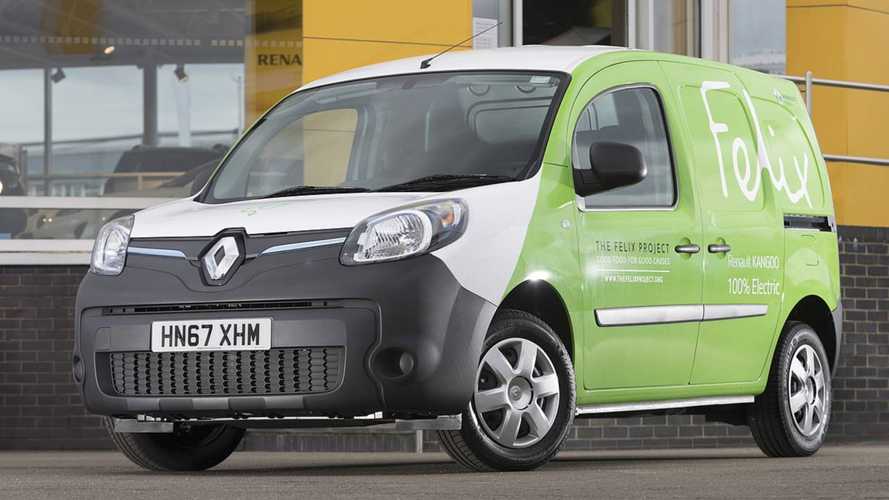 The Felix Project will use the seven Kangoo Z.E. vans for city-centre food deliveries and collections.

A London-based charity has grown its fleet of electric vans with the addition of seven new Renault Kangoo Z.E. light commercial vehicles.

The battery-powered panel vans will be used by The Felix Project to provide London’s most disadvantaged inhabitants with fresh food.

Electric vans could be the future of urban deliveries...

It’s the latest development in a partnership between the charitable organisation and the French vehicle manufacturer, who began their relationship in November 2017 with the initial donation of a single van.

Now, the charity is delivering 20 tonnes of food every week, and the new vehicles will allow it to expand its offering and reach more people in need.

The food is collected from supermarkets, wholesalers and other suppliers, who cannot sell it for a number of reasons, and delivered free of charge to around 200 charities and schools in the UK’s capital city. In turn, these organisations then provide meals, snacks and food parcels to disadvantaged people, including the elderly or homeless, struggling families and those with mental health issues.

All the vans will be based at the Felix Project’s London HQ, while the vehicles already based there will move to the charity’s other sites. As a result, the organisation’s central distribution and collection service will become 100 percent electric.

The vans, which normally cost £14,799+VAT once the government’s Plug-in Van Grant has been applied, use a 33 kWh battery to offer a range of 124 miles on a single charge. As a result of using these vehicles in the city centre, the charity will save money on the London Congestion Charge, as well as reducing fuel bills and reducing its carbon footprint.

Anne Elkins, development manager for The Felix Project’s school programme, said the zero-emission vans would assist the charity in extending its operations.

“The new Kangoo Z.E.s will make a big difference to our operation, allowing us to plan more routes and also collect more donations that are made available on an ad hoc basis and which need to be collected in a short time frame,” she said. “It’s great to have the extra capacity and the support from Renault.

“Our original Kangoo Z.E. is a big hit with our drivers due to its manoeuvrability and being so easy to drive. The van really is a great fit for us as it does everything we need and adds another carbon efficient element to our operation’s ethos on protecting the environment by cutting down food waste and ensuring that good, nutritious food isn’t thrown away.”

Vincent Tourette, the managing director of Groupe Renault UK, said the company was proud to support the charitable project.

“We’re exceptionally pleased to extend our support of The Felix Project,” he said. “The charity is passionate in what it does and it’s a privilege for us to play a part in helping them to grow their operation and ultimately supply food to those in the capital who are in the most need. With its latest Kangoo Z.E., The Felix Project can extend its reach but also invest the majority of their current fuel and congestion charge costs back into other areas of the business.”