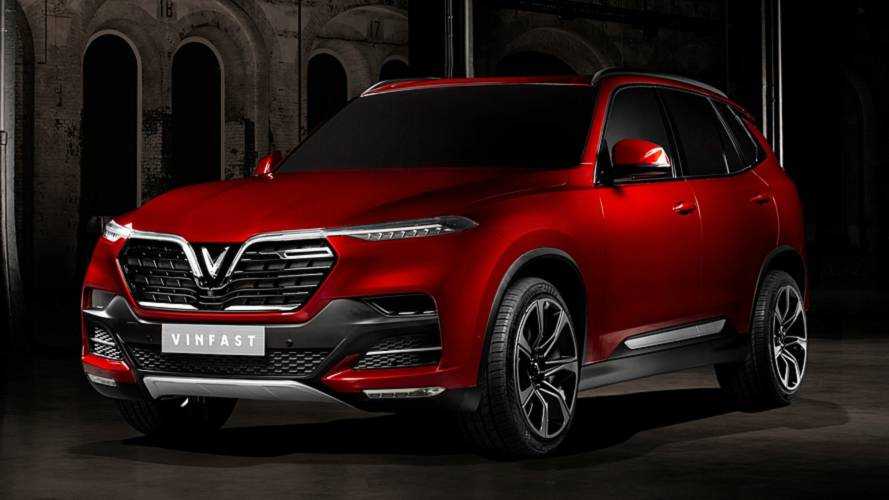 Both vehicles will have a public debut next month at the Paris Motor Show.

Are you ready for a new saloon and sport utility vehicle from Vietnam? Fledgling Vietnamese automaker VinFast is headed to the 2018 Paris Motor Show next month to show the world its first two vehicles, and the company is giving us a preview of that event with a small batch of photos depicting two handsome machines. Credit for at least some of the snazzy design work falls to Pininfarina, which developed the vehicles with VinFast’s in-house team to create what you see here.

These cars will also be in Paris:

“The strong, distinguishable design, enhanced by elegant lines and refined details, gives our cars several distinctive highlights,” said David Lyon, VinFast’s design director. “First and foremost, these emanate around the V logo in the grille which references the country of Vietnam, as well as the Vingroup and VinFast brands. In conjunction with Pininfarina, we have carefully sculptured each body line to express the natural beauty of Vietnam and the warm-hearted and dynamic characteristics of its people through a modern and world-class design language.”

Admittedly, we often hear such abstract language from automakers when it comes to explaining vehicle design. In this case, however, there is a direct connection with how both the SUV and saloon relate to the people of Vietnam. That’s because VinFast actually presented 20 different designs from multiple companies directly to the people, who then voted on the one they liked best. 62,000 people participated, and Pininfarina went home as the winner with the two rides you see here.

At this point we’d love to tell you more about the vehicles, but that information will presumably be forthcoming. There aren’t even names to reference thus far, aside from the VinFast Saloon and SUV. We saw vague renderings of both vehicles back in March – just enough to whet our appetites but they were still rather generic in design. The finished products look better proportioned and quite posh compared to the early renders, and we’re looking forward to seeing more at the Pairs Motor Show.

Hanoi, 10 September 2018 – The first two cars from new Vietnamese car company, VinFast, display its philosophy of ‘Vietnamese – Style – Safety – Creativity – Pioneering’ through a world-class design language developed with the world-renowned Pininfarina design team in Italy. The two premium models – a sedan and a SUV – will be given their world premieres at the Paris Motor Show on 2 October 2018.

From a starting point of exceptional proportions, designers from VinFast and Pininfarina created timeless cars that each feature a long wheelbase and elegant, truly inspiring styling. A long bonnet, classic trunk and horizontal body lines create a symmetrical, sophisticated and elegant beauty for the premium sedan. The SUV’s more muscular bonnet and bold, purposeful character lines endows it with a more sporty identity, as if it is poised to break free.

One specific highlight of the debutant’s design language is prominent at the front of both its new cars. The chrome V emblem at the centre of the grille is confidently and distinctively symmetric. To the right is a horizontal chrome splint that combines with the LED daytime running lights to create an italicised F-motif, representing the second syllable of VinFast, and a unique asymmetric flourish. From the central V emblem radiates the bold and lean crease lines that run over the bonnet, creating a fresh and modern look, reflecting the pride of Vietnam’s first car manufacturer to reach for the world.

“The strong, distinguishable design, enhanced by elegant lines and refined details, gives our cars several distinctive highlights,” explains David Lyon, Director of Design at VinFast. “First and foremost, these emanate around the V logo in the grille which references the country of Vietnam, as well as the Vingroup and VinFast brands. In conjunction with Pininfarina, we have carefully sculptured each body line to express the natural beauty of Vietnam and the warm-hearted and dynamic characteristics of its people through a modern and world-class design language.”

The proud and energetic styling of the VinFast sedan and SUV are also heavily influenced by the new company’s progressive approach to design. Breaking all traditional car development rules, VinFast gave the people of Vietnam the opportunity to determine the styling direction at the very start of the design process. More than 62,000 people voted when presented with 20 design sketches from four world-renowned Italian car design houses. Starting with ItalDesign’s winning concepts, the cars’ designs have since been developed and completed by Pininfarina. Designed for the Vietnamese people based on a selection made by the Vietnamese people, these debut VinFast models can truly be regarded as national products of Vietnam, embracing the pride and ambition of its citizens.

As planned, just a year since the public design vote, VinFast will present the sedan and SUV on the international stage at the Paris Motor Show (press conference: 10.45am* CET on 2 October 2018), before introducing them to the Vietnamese public at the end of the year.

With its debut in Paris, VinFast will become Vietnam’s first automotive manufacturer to participate in a major international motor show, signalling the confidence, pioneering approach and global outlook of a new and energetic brand.