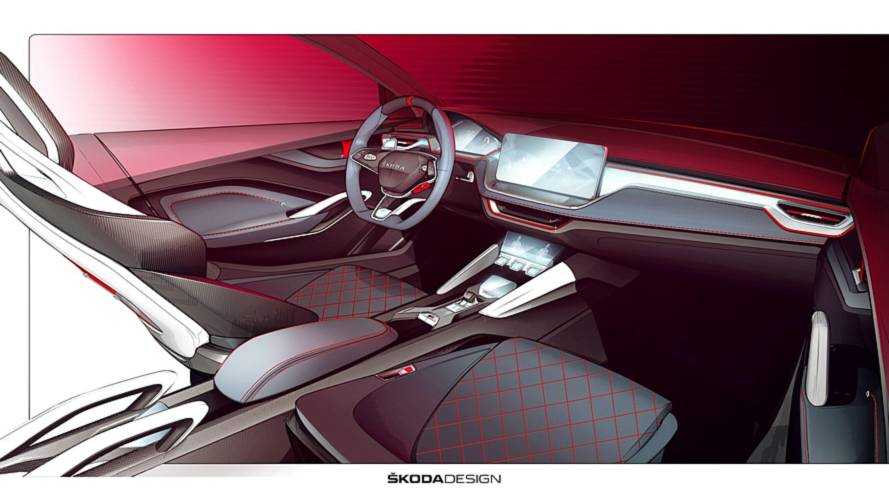 Skoda has been playing it safe with its interior designs for as long as we can remember, and it looks like the trend will continue in the years to come. Bound to debut at the Paris Motor Show next month, the Vision RS won’t wow you with its dashboard design, but the big screen on the dashboard accompanied by a smaller touchscreen on the centre console goes to show Skoda is getting ready for a high-tech future.

While on current production Skodas the infotainment’s display is neatly integrated in the cabin, it looks like future models will adopt a tablet-like central screen of a much bigger size. The all-digital instrument cluster is not exactly a novelty considering it’s already available on a variety of models from Mladá Boleslav.

With this being an RS-badged concept, the hot hatch adopts a multitude of sporty red accents throughout the cabin, including the four body-hugging seats covered in vegan Alcantara. As with the exterior teased last week, the cabin features an abundance of carbon fibre made from 100-percent recycled polyester. Carbon fibre is nicely combined with fancy crystal coming from Czech glass manufacturer Lasvit to create an interesting ambiance never seen before in a Skoda.

Technical specifications are not available at this point, but Skoda does mention the Vision RS features a DSG transmission.

A full reveal is scheduled to take place at the beginning of October in Paris, ahead of a possible production version due in the years to come as an RS version of the Rapid replacement. The Vision RS will be joined in France’s capital next month by the Kodiaq RS a.k.a. the fastest seven-seat SUV at the Nürburgring.