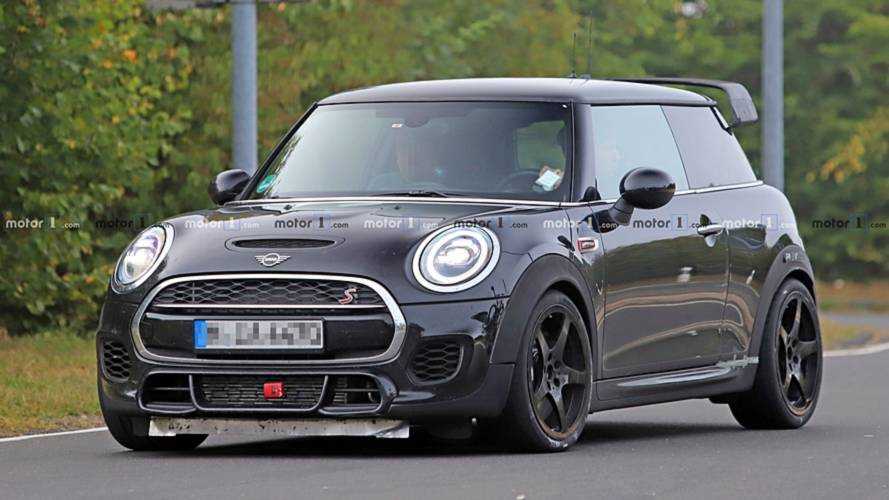 It looks like we'll get some limited-edition GP models after all.

The evolution of the Mini, at least from a styling standpoint, hasn’t been too dramatic over the years. That could be one of the reasons why this winged wonder was spied by our photographers without any sort of camouflage. We think it’s a high-performance John Cooper Works GP version, which we saw in a concept form a year ago at the Frankfurt Motor Show. There’s another more applicable reason, however, for this test car to be running without coverings. We’re likely seeing a test mule wearing a standard Mini Cooper S body with upgraded bits underneath.

Take a close look at the JCW GP Concept

If you recall, the JCW GP Concept was rather flamboyant with its body kit, scoops, and of course the big wing on the back. The wing is the obvious giveaway that something different is happening on this Mini – it’s a dead ringer for the concept’s wing, but couldn’t this just be a Cooper S with a spoiler on the roof? The metal strip down low on the front fascia and the red sensor box tell us this is some kind of test mule, and the brake rotors behind the wheels look bigger as well. Don't forget the exhaust tips at the rear that appear larger, too.

If this is a test mule for a new higher-performance JCW GP variant, what other kinds of performance tweaks can we expect? The larger exhaust points to more power than the current 228 bhp available in the JCW. How much more isn’t confirmed, but rumours suggest something in the 280 - 300 bhp range. We’ve already seen larger brakes, and there would certainly be some suspension tuning for better poise at the track. Expect some carbon fibre infusion as well to help reduce weight.

Mini did a limited run of previous GP models, and now that we’ve seen a car on the street running with the big wing, it seems a new batch of hardcore track-focused models are in development. As for when it will be available, that will likely happen sometime late next year, or early in 2020.