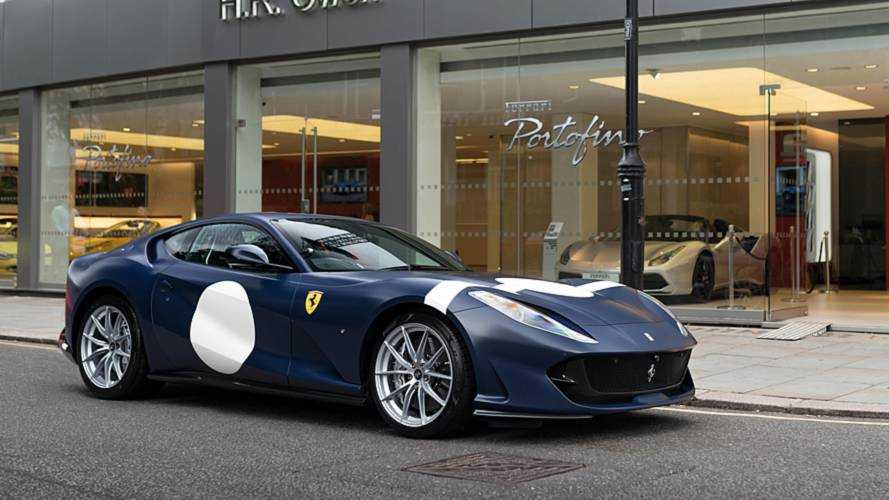 The Italian supercar wears one of Sir Stirling's most famous liveries.

Ferrari has delivered an 812 Superfast with a Sir Stirling Moss livery to a customer in London.

The 789 bhp V12 supercar wears the navy blue colours of the legendary British racer’s 1960s Ferrari, which he drove to victory at Goodwood, Brands Hatch and Silverstone.

More from the prancing horse

Watch this Ferrari LaFerrari drift around a dirty factory

That 250 SWB Berlinetta Competizione’s spirit is evoked by the Blu Scozia Opaco paintwork of the 812, which also features the white stripe and roundels that marked out Moss’ car.

The vehicle, which was finished by Ferrari’s Tailor Made customisation department, was handed to its customer by H.R. Owen, the British luxury dealer group. The group runs the only Ferrari-approved boutique of its kind, the Atelier in Knightsbridge.

H.R. Owen’s CEO, Ken Choo, said: “Ferrari has such an incredible history, both on the road and on the track, so we applaud this customer’s choice in evoking an iconic livery for his 812 Superfast. It’s fitting that this design was first seen on a V12 berlinetta Ferrari in the early ‘60s and here – more than 55 years later – we see it on a car that can trace its V12 lineage right back to the 250 SWB and beyond.”

This is not the first time a Ferrari has been seen in a classic racing livery, after 2016’s 70th anniversary celebrations saw the Italian company deck out its models in iconic colour schemes.

Back then, the company painted up 350 cars, including 488 GTBs, F12TdFs and California Ts, in colours including Moss’ blue and white.