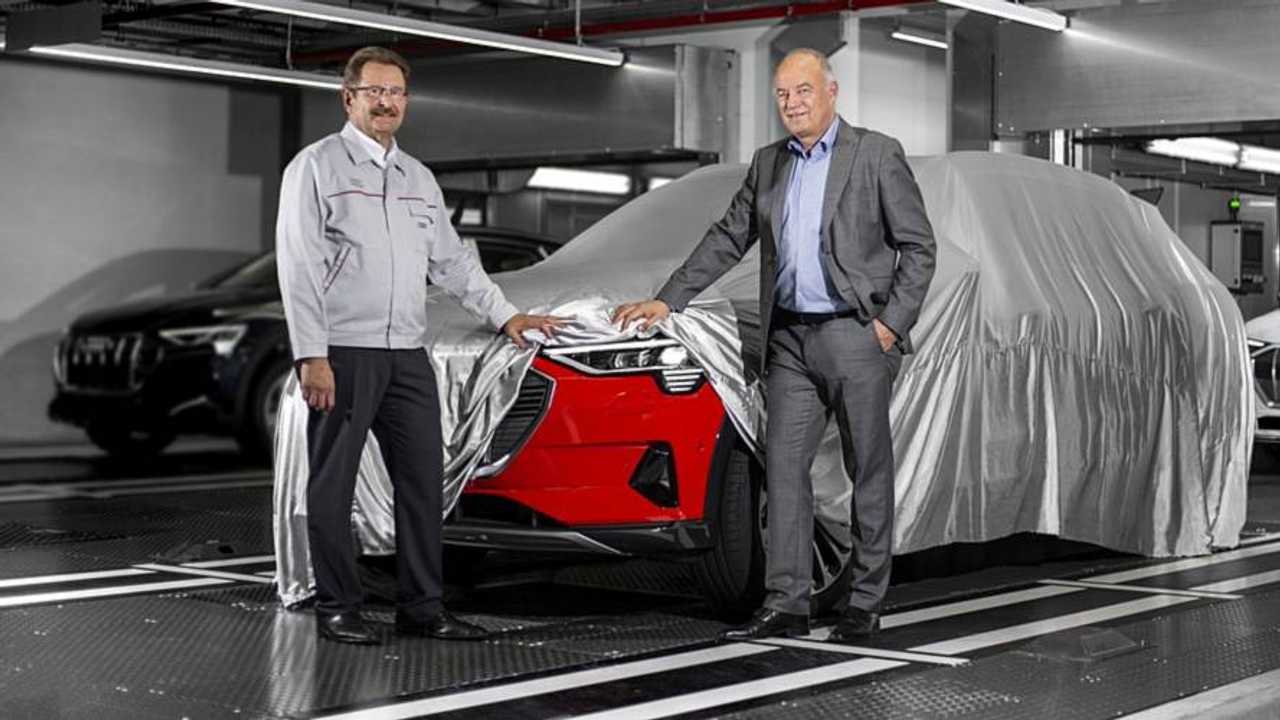 Hiding underneath the cover is Audi's very first electric SUV.

We are only a day away from the world unveiling of the Mercedes EQ C and it looks like Audi is trying to remind us later this month we’ll be seeing another fully electric crossover from a German premium brand. The road-going E-Tron will be unveiled at a special event in San Francisco on September 17 and today we get to find out series production has already commenced.

A closer look at the Audi E-Tron electric crossove

2019 Audi E-Tron energy recuperation and horsepower details are in

This important announcement is a good opportunity for Audi to drop yet another teaser of its production-ready electric crossover, depicted here in a Misano Red shade while largely hiding underneath a cover. The Four Rings are assembling the E-Tron in Belgium’s capital Bruxelles where the more stylish E-Tron Sportback will be manufactured from 2019.

Thanks to an extensive teaser campaign, we know pretty much everything there is to know about the zero-emissions crossover. Its design has been teased to death, so we’re not expecting any big changes once the wraps will come off the final version. The interior has also been massively previewed – right down to the swanky side cameras replacing the conventional mirrors.

We also know a great deal about the technical specifications, with Audi revealing the E-Tron will pack dual electric motors developing a combined 355 bhp and 414 lb-ft of torque. For eight seconds, the powertrain can push out 402 bhp and 490 lb-ft once the driver activates the boost model.

Audi has said the E-Tron will offer more than 248.5 miles in the World Harmonised Light Vehicle Test Procedure (WLTP) cycle thanks to a large 95-kWh battery pack, and will do 0 to 62 mph in less than six seconds.

The Ingolstadt-based marque wishes to point out the E-Tron will go down in history as “the world's first certified CO2-neutral mass production [vehicle] in the premium segment.” To offset the emissions generated during the manufacturing process, Audi uses energy obtained from renewable sources and it also conducts various environmental projects to clean the air in the area.

All that’s left to do now is for Audi to finally take the covers off the vehicle, literally.