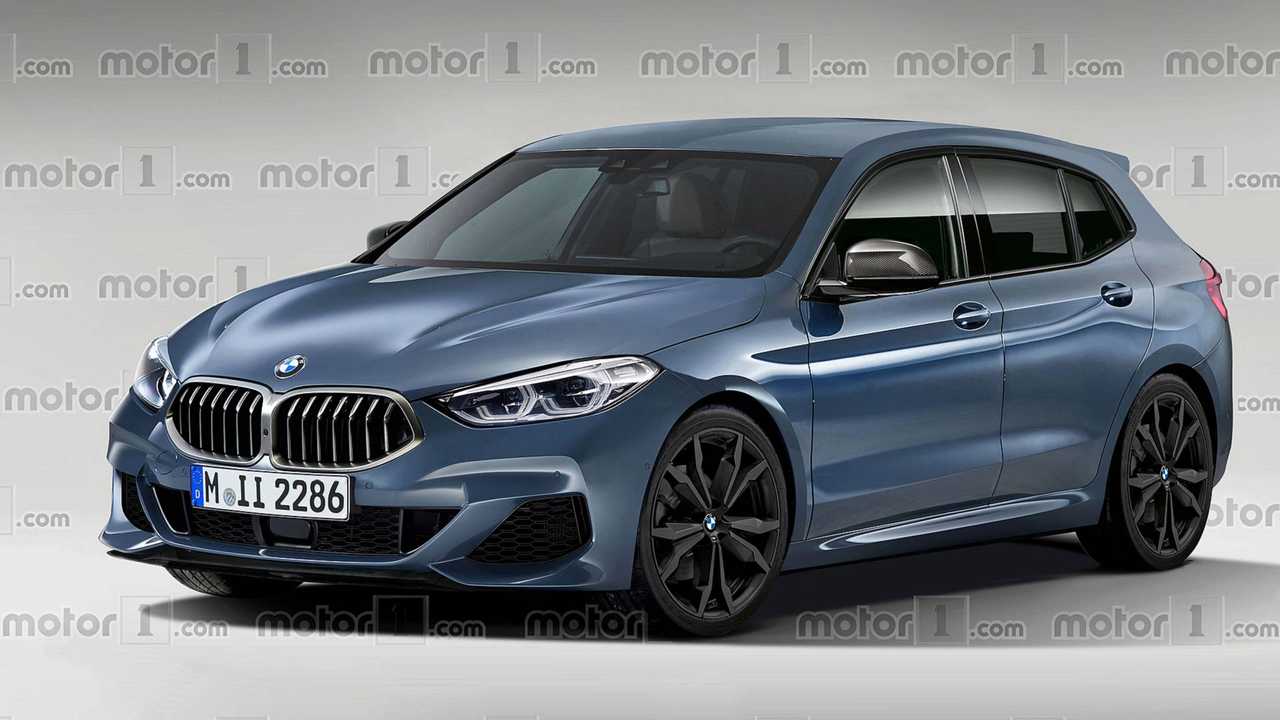 A rendering shows the new generation of the compact car

The current generation of the BMW 1 Series (internal codes for five- and three-door models: F20 / F21) started in 2011. According to the product life-cycle guidelines of the automotive industry, the successor will be due in 2019. Our rendering shows what the car might look like.

The grille has the normal shape, so it is not mirrored like at the X2. Whether the front headlights will be shaped exactly as the rendering shows, remains a bit speculative, since the lights were heavily camouflaged in the spy shots we have. In any case, the LED light elements will now receive the new hexagonal shape. Our rendering obviously shows a version with the M Sport Package, so it has large air intakes. The mirrors are shown here in carbon. The distance between front wheel arches and the front door edge is now much lower than before. The shoulder line lies (same as the current model) at the height of the door handles. The roofline drops off to the rear, while the beltline (the lower edge of the side windows) rises. As before the B-pillar is hidden behind blackout appliques.

Technically, there are a lot changes in the new 1 Series. Above all, the rear-wheel drive is replaced by front-wheel drive. The newcomer is based (like the 2 Series Active / Gran Tourer, the X1 and the Mini Countryman) on the UKL platform. It is the same model as the 1 Series saloon already sold in China (internal code: F56) with a length of 4.46 metres and a wheelbase of 2.67 metres. For comparison, the current 1 Series measures 4.32 meters and the wheelbase is 2.69 meters. The new 1 Series should take over the wheelbase of the F56, but it should be slightly shorter.

Whether there will be again both three- and five-door versions, is not yet clear. Our picture shows the five-door, however, the three-door could (like the Mercedes A-class, but unlike the VW Golf) fall away. As far as the engines are concerned, the new compact from Munich will probably only get three- and four-cylinder engines. The strongest four-cylinder petrol engine from Munich so far has 258 hp -- that would be a candidate for a 130i. Furthermore, there are rumours on a 300 hp four-cylinder in the X2, which could also work in a 135i. A six-cylinder as in the current 140i is not compatible with the UKL platform. The plug-in hybrid we expect will not be a substitute for the 340-hp inline six, but will be committed to fuel-saving. The 224-hp hybrid technology will likely be taken over from the 225xe Active Tourer iPerformance and the corresponding system in the Mini Cooper SE Countryman All4. In addition, there are rumours about a mild hybrid system for the 1 Series and the replacement of the torque converter automatic gearbox by a dual-clutch transmission.

We expect the new 1 Series to get an instrument display inside. In any case, that would be good, because the competition has it indeed: for the Audi A3 it’s called the Virtual Cockpit, the VW Golf has an Active Info Display and the new A-Class a MBUX widescreen display. In the rear, the new 1 Series should offer more space than before. However, the centre tunnel will hardly be smaller than now, as the new 1 Series will also be available with xDrive - so space must be provided for a drive shaft to the rear. As far as the boot is concerned (so far only 360 to 1,200 litres), the new 1 Series will probably grow. The front-wheel drive allows for improvements here. The prices are likely to remain about the same, in the UK they currently start around £22,450 for the three door version (118 SE with 136 bhp).