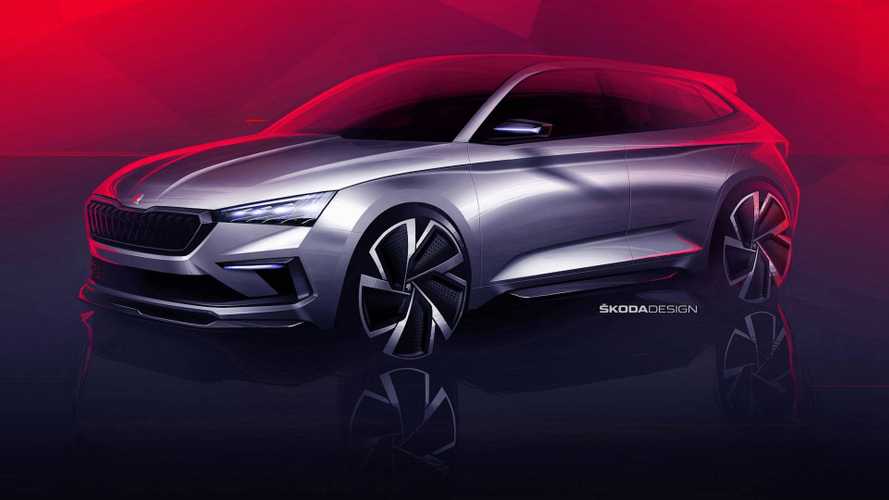 Is that carbon fibre – on a Skoda?

Skoda has quite the surprise in tow for the forthcoming Paris Motor Show where it will unveil a new RS-badged concept car to sit alongside the production-ready Kodiaq RS. Two rather promising design sketches have been published and these could signal what the Czech brand strongly suggests will be a compact hot hatchback in a few years.

The latest from Skoda

Details are scarce for the moment, but at least we know the Vision RS is 4356 mm long, 1810 mm wide, and 1431 mm tall, with a wheelbase stretching at 2650 mm. The adjacent teasers are showing a five-door hatchback with a racy body featuring a beefy roof-mounted spoiler and an abundance of carbon fibre. As you would come to expect from a concept, the car rides on oversized wheels you likely won’t be able to get once the production model will reach a dealership near you.

The identity of the model that will eventually get the RS treatment as suggested by the concept has not been disclosed, but it’s not that hard to figure it out. With Skoda saying just last month the Rapid replacement will grow to become a Golf rival, we strongly believe the Vision RS is a taste of things to come as far as Skoda’s take on the GTI recipe. The concept car is not only longer and wider than the existing Rapid Spaceback, but it also has a more generous wheelbase. Putting two and two together, the Rapid successor will be blessed with the RS badge as well as a new moniker to cut ties with the past.

This will be the third RS model in Skoda’s portfolio, which might grow to include a Superb RS if Skoda will eventually green-light the model. An entirely electric RS model has already been announced, and who knows, maybe we’re looking at it since the concept doesn’t seem to have any visible exhaust tips in that carbon-clad diffuser. In addition, the styling language echoes that of the zero-emissions Vision E, so don’t be too surprised if the hot hatch will eschew the combustion engine.