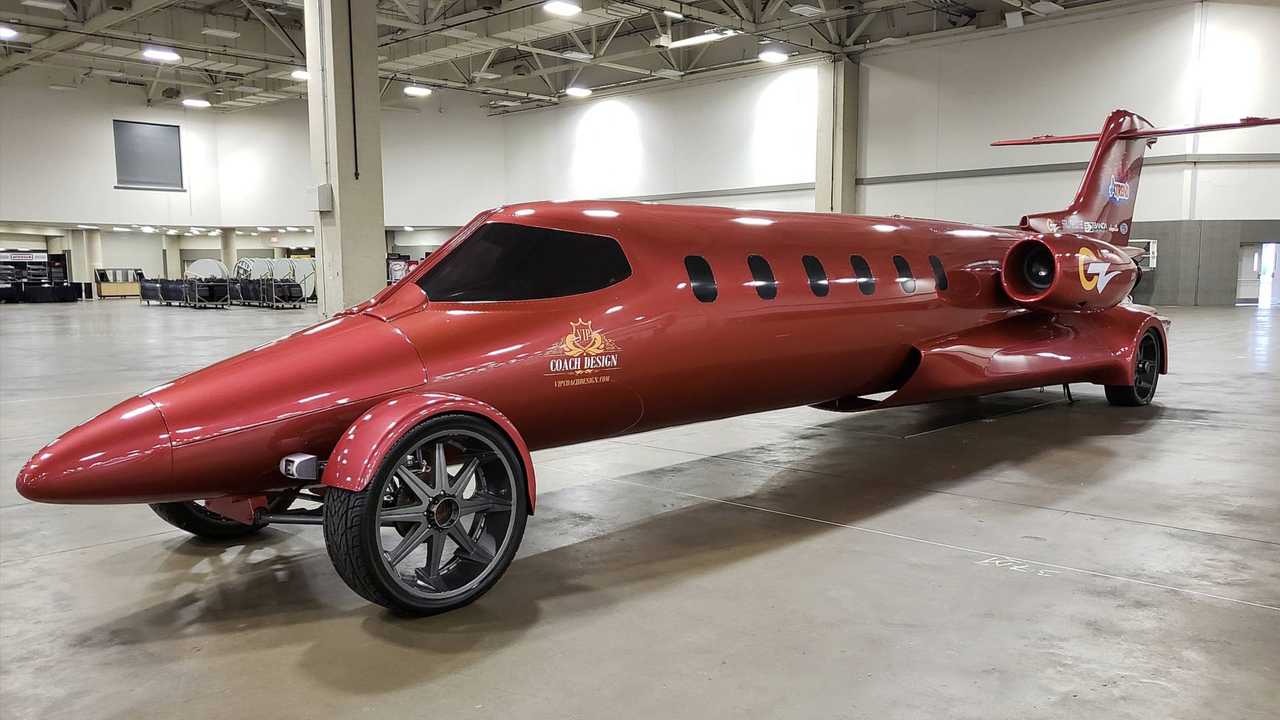 We talked with the builder of this crazy cool creation.

We spoke with Frank DeAngelo, one of the masterminds behind the bonkers Limo-Jet. Aside from a few years in limbo, this project indeed spanned 12 years and was born in 2006. 'I was dumb enough at the time to say yeah, let’s do it,' said DeAngelo to us during a phone interview, jokingly recalling how the Limo-Jet was born. Yes, that’s an honest-to-goodness Lear Jet fuselage, purchased and given considerable attention to turn it into a car. With it being aluminium and not designed for continuous ground duty, numerous specialists were called in to help infuse steel reinforcement and a steel chassis with the aluminium body, which isn’t an easy task by any means.

See these other awesome automotive creations

Racing companies were involved in fabricating the front and rear suspension components, and DeAngelo said the gigantic fibreglass rear cowling alone took approximately nine months to create. The electrical work was another mountain by itself. Looking inside it’s easy to see why, but don’t just look inside – those jet engine nacelles that light up also have speakers in them.

All total, the project involved between 60 and 100 people to bring the Limo-Jet to life. It drove for the first time just last week at KnowledgeFest in Dallas, U.S., and DeAngelo said it actually was quite good from behind the wheel. Power comes from a standard GM Vortec V8, and though it’s not a speed demon, it’s more than enough to keep the Limo Jet hopping.

And it’s big – real big. It stretches 12.8 metres, with the tail 3.5 metres in the air. Even with the aluminium fuselage it tips the scales at 5,443 kg, and if that still doesn’t help you understand the size of this thing, those are freaking 28-inch wheels it’s riding on.

DeAngelo said the company is looking for sponsors to bring the Limo-Jet to special events. There’s also talk of building more now that they know the process better, with a range of powertrains available including electric power. As for cost? DeAngelo doesn’t quote a specific number but it’s in the seven-figure range. Given the quality of the build, not to mention the sheer outrageousness of it all, we suspect it’s certainly worth it.

The inside is packed to the gills with lights, speakers, screens, and enough seating for a wedding party. Up front is a single seat for the pilot driver, with a bank of screens that we’ll assume are used to help maneuver and see behind this lengthy land-based luxury liner. Everyone enters and exits through the single side door, and it looks straight-up freaking amazing.

The company’s Facebook page has all kinds of posts and photos showing the build process for this amazing machine.