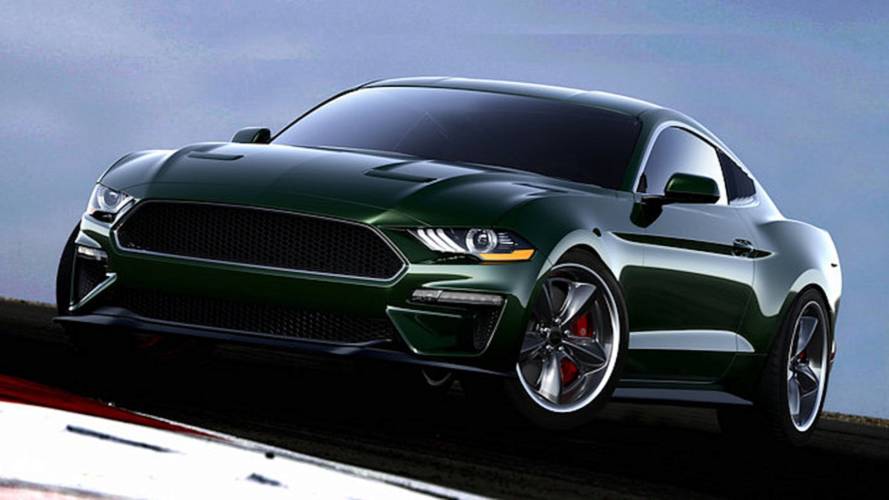 It won't be cheap, though.

The new Ford Mustang Bullitt is inspired by the Steve McQueen film with the same name. It wears a signature dark green finish, features a cue-ball shifter, and adorns Bullitt badging throughout. But one shop thinks the Bullitt Mustang isn't Steve McQueen enough.

We chat to the man who owns the Bullitt Mustang
⠀

Tuned struts and shocks, camber plates, a short-throw shifter, and a Steeda cold air intake with a performance tune are among the performance highlights. The Steve McQueen Edition Bullitt pumps out 500 bhp – a modest upgrade over the factory Bullitt 480 bhp.

Buyers looking for even more power, though, can option a 775 bhp supercharger upgrade. A rear seat delete, a four-point roll cage, a carbon fibre performance driveshaft assembly, and a leather and Alcantara-wrapped steering wheel are also available as optional extras. Though Steeda doesn't list pricing for all these extras.

Steeda's custom Bullitt Mustang will be limited to just 300 examples per year, with orders taken at certified Steeda Ford dealers. Each package will cost around £16,000 on top of the price of a Ford Mustang Bullitt (£44,995) before options. So if you want a Bullitt with even more bite, prepare to dish out some serious cash.

“Ford’s Mustang has always been a big part of my dad’s legend. I wanted to kick the already strong performance up several notches without losing that essential style that makes this car so desirable.   Less is more.  This Special Edition reflects the lessons my dad ingrained in me about what made his personal cars so desirable.”

Too Hot for the Day -- Too Cool for the Night

Steve McQueen. Whether on the silver screen or in real life he embodied effortless Cool.

It’s that Twinkle in the eye. A little Swagger. That quiet don’t-mess-with-this-guy-confidence. Nonchalant. Composed. Always calm. Yet hardwired for action. Friendly. But slightly aloof. Controlled. But with a hint of ready violence lurking nearby. Steve McQueen was who every little boy wanted to grow up to be.  And every grown man imagined themselves to be.  The Steve McQueen Edition Bullitt Mustang is the car every little boy wants to grow up to drive.  And every grown man imagines in his garage.

It was Steve McQueen...

IT IS The Steve McQueen Edition Bullitt Mustang

McQueen Racing, Steeda, and Galpin Auto Sports, alongside Chad McQueen, have announced the launch of the official Steve McQueen Edition Bullitt Mustang in a limited production of only 300/year. Using the stunning new Ford Bullitt Mustang as a starting point, this ultra-high performance edition has been purposely re-engineered to deliver supreme performance, improved driving dynamics, and offer an increased exclusiveness for this iconic Mustang.  The dedicated engineering and performance teams have spent considerable development time to create the most quintessential McQueen Mustang possible – The Steve McQueen Edition.   The design spec was classic McQueen - take an already excellent car and enhance power throughout the RPM band, while improving the handling capabilities suitable for both track and on-road, and give the design an even more classic restrained but undeniably cool stance that is menacing, yet understated package.

The substantial chassis, suspension, and drivetrain upgrades involve over 27 individual components that provide powerful and confident performance, all designed, engineered, and manufactured under strict ISO 9001:2008 Certified standards in the U.S.A. “The Steve McQueen Edition Program Team had no limits in their quest to incorporate key components that strategically work cohesively together delivering maximum performance” proclaimed Dario Orlando, President of Steeda, “the entire Steeda Team is proud to bring our over 30-years of experience in designing, engineering, and manufacturing high-performance Mustang components to this exclusive developmental team.”

In addition, with the dramatic power increases and changes to the suspension, it was necessary to also upgrade the wheel and tire fitment to give the car its distinctive stance.  To accomplish this, the Steve McQueen Edition Project Team worked hand-in-hand with HRE Wheels to design and engineer a modern reincarnation of the classic wheel that was on the original 1968 Mustang that Steve McQueen drove in the movie.  After countless design iterations, a new Steve McQueen Edition aluminum wheel was conceived that provides a staggered wheel fitment that optimizes the fitment of Nitto NT555 G2 High Performance tires (275/35-20 front and 315/35-30 rear).

Steve McQueen would be proud

The Steve McQueen Edition of the Bullitt Mustang is strictly limited to 300 serialized versions (globally) per year.  Vehicle reservation deposits are being taken immediately from Steeda Certified Ford Dealers and directly from Retail Customers. Act now to lock in your low assigned Certified Build Number.

Customers that have a 2019 Bullitt Mustang on order from a Ford Dealer:

A customer can work directly with us and in turn, we will collaborate with your ordering dealership to have Ford Motor Company deliver your 2019 Bullitt Mustang directly to one of our four (4) assembly locations where we will transform it into a Steve McQueen Edition Bullitt Mustang.  We will then ship it via enclosed carrier directly to you or your dealer.   Just email us at mcqueen@steedavehicles.com or call 754-800-4165 to talk to one of our Performance Specialists.

For customers that want to order a Steve McQueen Edition Bullitt Mustang direct from Steeda Vehicles, a donor Bullitt Mustang is required as that is the vehicle platform every Steve McQueen Edition is based on.  We can work directly with the Ford Dealer of your choice or have you work directly with one of our preferred Steeda Certified Dealers.  Once your order is in place for the donor Bullitt Mustang, we will coordinate with the ordering Ford Dealer and Ford Motor Company to have the vehicle transported directly from the Ford assembly plant to one of our four Steeda assembly locations, where we will then transform it into a Steve McQueen Edition Bullitt Mustang.  After our modifications are complete, we will then ship it via enclosed carrier directly to you or your ordering Ford Dealer.  Just email us at mcqueen@steedavehicles.com or call 754-800-4165 to talk to one of our Performance Specialists to coordinate your initial order.

Should you have existing Bullitt Mustang orders, or have future Bullitt Mustang allocation from Ford  that you desire to be transformed into a Steve McQueen Edition Bullitt Mustang, please contact us at: dealer@steedavehicles.com or call 754-800-4165 to talk to one of our Performance Specialists.  We will coordinate the order with you, secure your Steve McQueen Edition Bullitt Mustang allocation with us, and facilitate the direct drop shipping of the donor vehicle directly from the Ford Motor Company assembly plant directly to one of our four assembly locations.  Once assembly is complete, we will ship it to your dealership in an enclosed carrier.