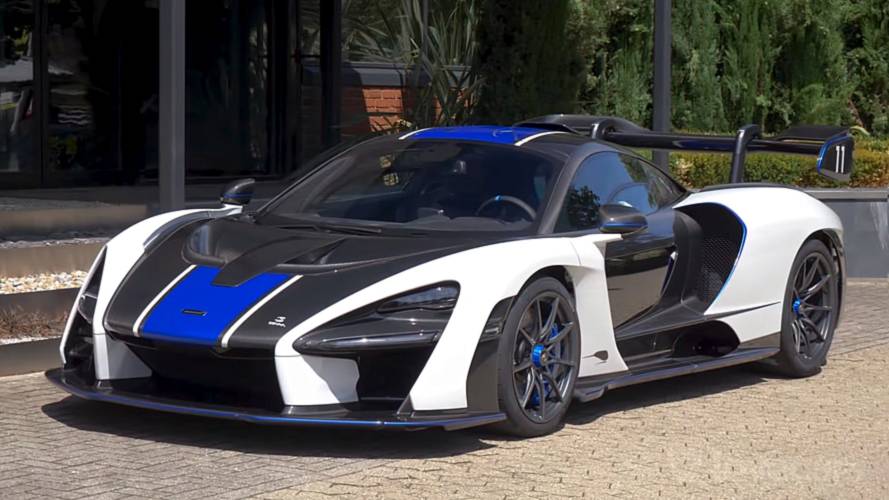 McLaren has been criticised by some for taking the concept of “form follows function” to the extreme when engineering the Senna, but it has not been an issue for the company in terms of customer demand. As the video shows, the Woking-based marque has already built the 11th Senna for a wealthy individual from Saudi Arabia. The car’s owner also happens to own a Mercedes SLR McLaren chassis number #11, an MSO HS chassis number #11, a P1 with the #11 chassis number, and has the 11th build slot for the three-seat Speedtail.

This McLaren Senna has £390K in carbon fibre upgrades

There literally won’t be another Senna with this Bianco Fuji + Electric Blue colour combo as no other car will be painted in this combination. This one’s a bit more special as it has been pampered by MSO and comes with a generous amount of exposed carbon fiber as well as the rather cool see-through glass in the door panels.

Carrying the original McLaren logo as well as Ayrton Senna’s signature, the unique Senna boasts a double exhaust at the back since only Euro-spec cars need a triple setup to comply with the legislation. The interior is just as special as the radically styled body, featuring an abundance of exposed carbon fibre and electric blue accents including for the “MSO” logos embroidered onto the headrests.

The car’s owner was kind enough to allow the video’s host to drive the car a little bit, but for obvious reasons, he was limited to the car park at McLaren’s headquarters in Woking, U.K. Nevertheless, it’s a good opportunity for us to hear the grunt provided by the twin-turbo 4.0-litre V8. It’s capable of producing an immense 789 bhp and 590 pound-feet of torque in a supercar that weighs only 1,198 kg without fluids.