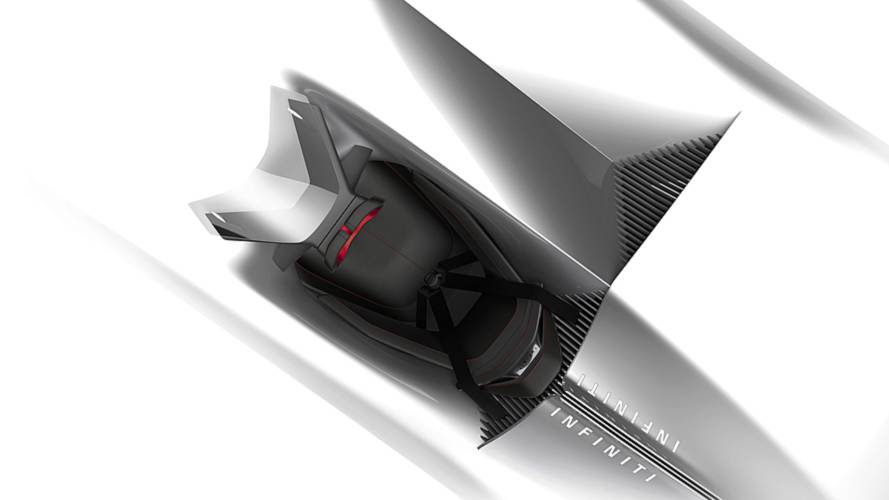 Infiniti appears to have a follow up to the retro Prototype 9 with this more futuristic roadster concept.

Infiniti will unveil an electric vehicle concept at the 2018 Pebble Beach Concours d’Elegance on August 23. Unfortunately, the first look at the vehicle only provides an enigmatic glimpse of it.

The teaser picture is a sketch looking downward on the concept's cabin. It suggests that there's no roof and only a single seat. A triangle-shaped intake sits right behind the driver's head, and the pilot grips a red-accented steering wheel. A tiny, Brooklands-style windscreen is the only protection from the elements. The stark shadows here indicate the vehicle has sharp styling that would lend it a futuristic aesthetic.

Get The Latest Scoop On Infiniti:

Infiniti Executive Design Director Karim Habib offered a brief description of the machine in the company's teaser announcement: "Our new concept provides clues to where the Infiniti brand is heading. For us, electrification means performance – our electrified cars will be powerful, efficient, and a joy to drive, and the new concept is a physical representation of our electrified performance future.”

Judging by this peek at the design, it seems like the new concept could be a spiritual successor to 2017's Prototype 9 concept (gallery above). However, where the previous roadster features an aesthetic that looks back to the 1930s, the new one appears to showcase sharper lines that would point toward the future.

Unfortunately, when Infiniti actually puts an electric vehicle on sale don't expect the vehicle to look like this upcoming concept or the Prototype 9. Instead, the brand intends to use the Q Inspiration Concept saloon as the basis for an EV that would arrive in 2021. Powertrain details about the model still remain a mystery, but Infiniti intends to tailor the car toward the Chinese market by emphasising a large interior space.

HONG KONG (Aug. 09, 2018) – INFINITI will debut a new concept vehicle at the
2018 Pebble Beach Concours d’Elegance signaling the brand’s vision to blend
performance and electrification. With executive design director Karim Habib at the
helm, the teams in Japan, the U.K. and the U.S. created a striking concept that offers a
glimpse into the brand’s desire to deliver a thrilling drive experience from electrified
powertrains.

Following the introductions of the retro e-roadster Prototype 9 and stunning Q
Inspiration, this new concept vehicle underlines the electrified performance theme of
the brand’s announcement to introduce new vehicles with electrified powertrains from
2021.

“Our new concept provides clues to where the INFINITI brand is heading. For us,
electrification means performance – our electrified cars will be powerful, efficient, and
a joy to drive, and the new concept is a physical representation of our electrified
performance future.”
Karim Habib, INFINITI Executive Design Director

The new INFINITI concept will be revealed at Pebble Beach on Aug. 23. Full media
information will be available at www.infinitinews.com.