Tanker exploding on highway looks like hell on Earth 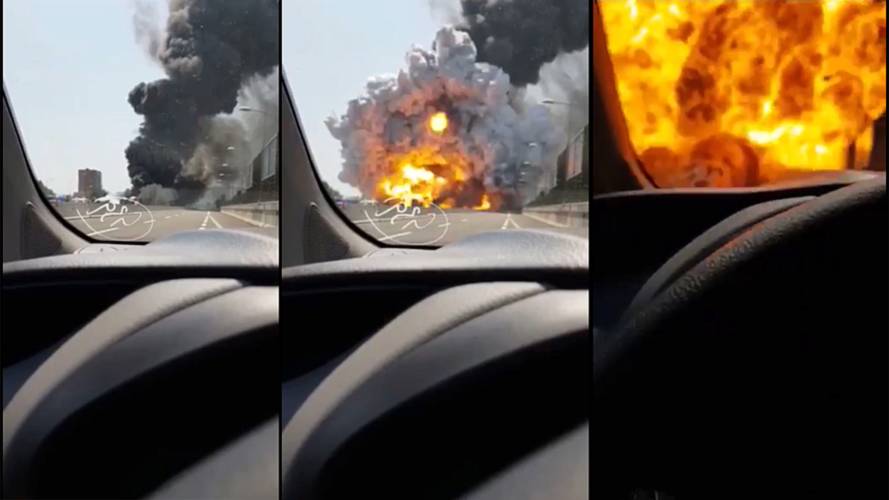 The roadway also collapses, leaving one dead and over 100 injured.

The images look like that of an action film, but the tragedy is unfortunately real with preliminary estimates of one dead and over 100 injured. The crash occurred on August 6 near Bologna in northern Italy, and it all went wrong in just a few seconds. A tanker was carrying flammable material on the A14 motorway between Borgo Panigale and Casalecchio (Bologna) when it crashed into another vehicle and caught fire. That set up a chain of unstoppable events leading to a huge explosion that obviously affected other cars and even nearby buildings. The force of the blast was enough to cause the elevated section of highway to actually fall in on itself. Firefighters spent several hours on the scene trying to douse the flames.

Investigators are now at work trying to reconstruct exactly what happened, and this video footage below will certainly help. The video comes from a control camera operated by the State Police, and it clearly shows traffic coming to a standstill in the area. Unfortunately, the tanker doesn’t stop and actually, it doesn’t even appear to brake or swerve prior to the crash. The violent force of the impact immediately resulted in a fire, and it was shortly thereafter when the flammable material burst into a massive fireball.

The explosion led to the collapse of the roadway, which was actually an overpass for another highway. The shock wave also hit homes in the area, destroying many cars parked at dealerships near the location of the accident. The flames were so hot that firefighters struggled to even get close; a helicopter carrying water was brought in to assist in extinguishing the flames. Engineers are working on assessing the damage, though it goes without saying that this stretch of road will be closed for some time.