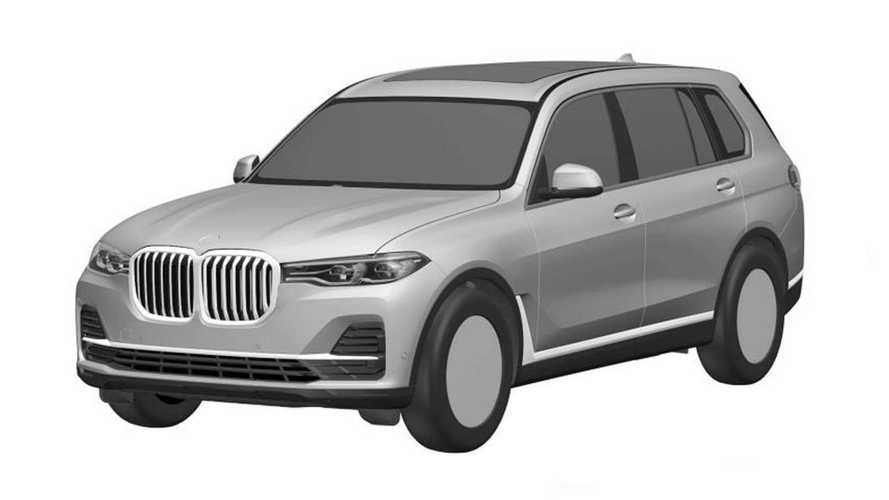 Like it or not, the concept's huge front grille will have a correspondent on the production model.

We’ve seen the concept and the prototypes, and now the time has come to take in the BMW X7 in full production glory. Our colleagues at Motor1.com Brazil were able to source these attached images from the Instituto Nacional da Propriedade Industrial (Brazilian National Institute of Industrial Property), following similar reveals of the production-ready 8 Series Convertible and 8 Series Gran Coupe back in June.

BMW’s belated answer to the Mercedes GLS stays true to the concept before it, for better or worse. It has that massive front grille we’ll also see on the 7 Series facelift, while the headlights are not as sleek as the ones installed on the Concept X7 iPerformance originally unveiled last year at the Frankfurt Motor Show.

Even though the styling is a bit conservative, we’re glad the new X7 is more than just an oversized X5 thanks to BMW’s efforts of separating the two SUVs by giving them distinct visual identities. Keep in mind that most cars look rather bland in these black and white patent images, so we believe the real deal will be significantly more interesting than this.

While images of the interior are not available on the INPI website, we do have a handful of spy shots depicting the cabin of BMW’s largest SUV. It will feature the company’s latest and greatest infotainment system working together with a digital instrument cluster in the same vein as seen on the 8 Series Coupe. The gear shift lever will be adorned with Swarovski crystals while the cabin will offer ample legroom thanks to a generous wheelbase measuring 3.01 metres.

The 5.01-metre large SUV will be offered with a seven-seat layout and also as a six-seater featuring two individual seats in the second row that will ease access to the rearmost seats. The luxobarge is expected to weigh somewhere in the region of 2,300 kilograms, a figure which will greatly depend upon the amount of kit installed and the engine type.

Speaking of which, the X7 will be available with the latest iteration of BMW’s biturbo 4.4-litre V8 linked to an 8-speed automatic ZF transmission and xDrive. Most of the engines will be shared with the smaller X5, including diesel units for European markets. We won’t be too surprised if a plug-in hybrid derivative will be launched later in the life cycle when an M Performance version might join the family as well.

Meanwhile, expect the regular BMW X7 to debut in the months to come. Assembly of pre-production cars has already kicked off in Spartanburg, and today, company chairman Harald Krüger announced series production will start towards the end of the year. Expect to see it in the metal at the Los Angeles Auto Show in December, following a possible online reveal a few weeks sooner.