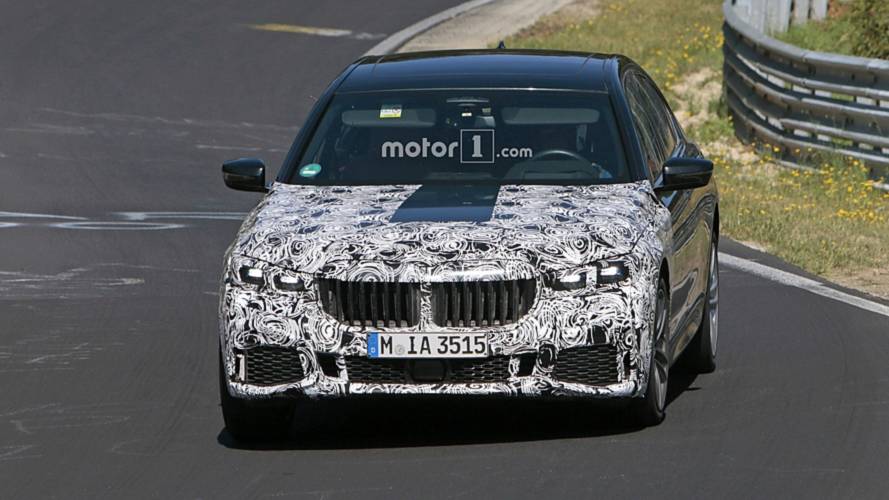 We will be seeing more of this large kidney grille on future BMWs, including the X7.

The upcoming BMW X7 will be the SUV equivalent of the 7 Series, so it comes as no surprise the two models will be sharing the revised front grille with visibly bigger vertical slats. The company’s flagship saloon has been caught on camera by our spies for the umpteenth time, once again hiding its reworked front fascia and mildly updated rear end.

Beyond the tweaked corporate grille, the prototype was rocking a shiny new bumper lending the luxobarge a sportier vibe also enhanced by the wider exhaust finishers at the back. BMW has also made some changes to the appearance of the headlights and rear lights, with the latter already exhibiting a new light pattern on the boot lid.

While we don’t get to take a peek inside the cabin, we can clearly see the dashboard remains partially concealed underneath black pieces of cloth. It can only mean BMW has tweaked the interior where we’re expecting to find the updated digital instrument cluster and the latest version of the infotainment system. These tech goodies were officially previewed mid-April and debuted in a production model with the much-awaited 8 Series revival. The X7 will get the same hardware and software, while the next-gen Z4 could be next in line to boast this setup.

Don’t get your hopes up too high just yet, but BMW trademarked the “M7” moniker a few months ago. However, that doesn’t necessarily mean it will finally come out with a competitor for the Mercedes-AMG S63 as it could just be a measure to protect the nameplate from being taken by a rival company.

Rumour has it production of the facelifted 7 Series will commence in March 2019 and one of the versions that will be available is going to be a plug-in hybrid 745e to replace today’s 740e. It will pack more electrified punch as well as a longer range in zero-emissions mode.

An official unveiling of BMW’s range topper could take place either late this year or early 2019.