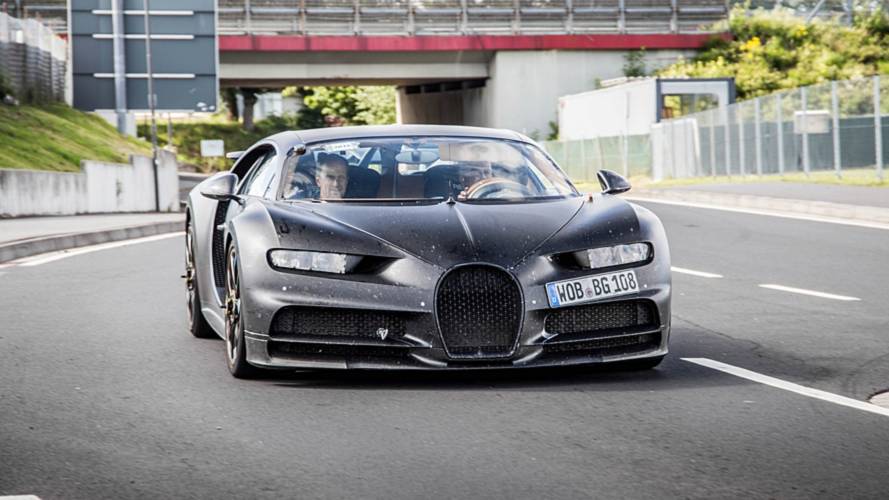 Could it be exercising upgraded components for the new Divo?

Bugatti has been spotted once again at the Nürburgring with a Chiron test car. The photos come from DCN Carphotography on Instagram, and while they don’t show much they do tell us that Bugatti is still up to something. The matte-black tester has different tail lights and we can see what appears to be sensors or perhaps telemetry units on the windscreen, and it’s devoid of Bugatti badges. We find that last bit rather amusing since nobody in the world would mistake this car for anything other than a Chiron.

Why Is Bugatti Testing Two Chirons At The Nurburgring?

We’ve seen Bugatti at the ‘Ring a few times over the last month or so, and the company’s new Divo is likely the reason why. Bugatti hit us with a teaser of this “new” hypercar, which is expected to be a thoroughly tweaked Chiron that’s destined not for ludicrous top speed, but exceptional handling. Being a teaser we weren’t gifted with much information, other than the Divo would utilise a weight reduction with an aero package focused on downforce. The result, presumably, will be a Bugatti hypercar that eats corners for breakfast. Only 40 will be built, with each costing close to $6 million.

That would certainly explain why the niche builder is turning laps at the Green Hell. We don’t see any obvious aero changes on this test car, but that doesn’t mean the company isn’t working on tuning for new suspension components or other mechanical upgrades. According to the rumour mill, this upgraded Chiron could pack a different gearbox to further help with acceleration, among other things. From what we’ve heard, all the changes would allegedly drop the top speed to just 239 mph.

Is it possible Bugatti could be looking to set a Nürburgring lap record for production cars? After Koenigsegg rocked the automotive world (and perhaps Bugatti’s ego) last year with 0-249-0 mph acceleration runs and a 277.87 mph top-speed run – both of which were production car records – we wouldn’t be surprised to see Bugatti attacking the ‘Ring with fervour.