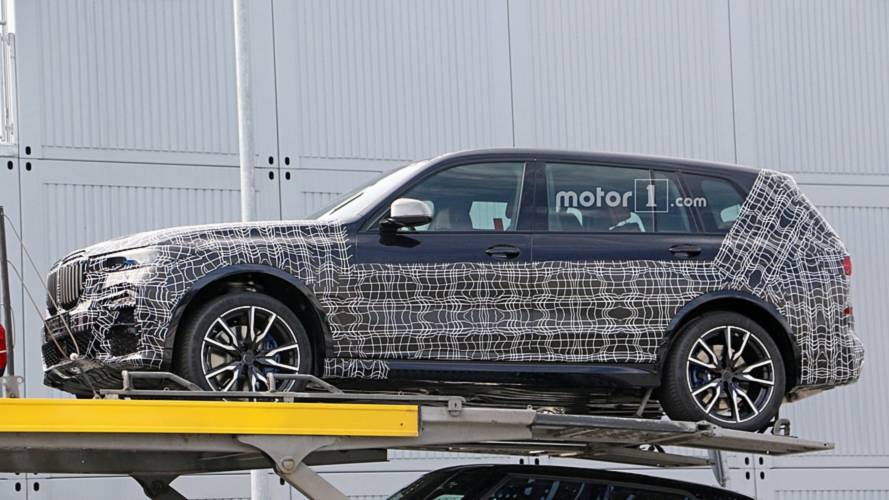 You know this isn't the finished product when the digital instrument cluster shows the 7 Series...

BMW sure took its sweet time coming out with a direct rival for the Mercedes GLS, but as the saying goes, better late than never. Debuting in the months to come, the first-ever X7 has been caught in full production guise resting on a trailer while heading to a test facility to undergo final evaluation. The blue brake callipers and silver mirror caps could be clues this was an M Performance version of some sort, much like it was the case with the new X6 spy shots shared earlier today.

While the recently unveiled X5 will continue to be offered with an optional third row, those looking for extra space for the rearmost seats will have to step up to the X7, though an adult probably won’t want to spend a lot of time back there. Its bigger footprint will enable a more spacious cabin, and you can see – by looking at the tip of the headrests – that this prototype had the two rear seats in the upright position.

More about the new X7:

Pre-production BMW X7s readied in the US

Getting in and out of the X7 should be quite easy judging by the generous length of the rear doors, while the trunk’s capacity should prove to be massive after folding down the second and third rows. Used as a five seater, BMW’s flagship will definitely have more cargo space to offer compared to the new X5. Legroom for passengers sitting on the second row of seats should be stellar, and it’s safe to assume the big SUV will have a sliding second row for additional flexibility.

We’ve attached a couple of older spy shots allowing us to take a peek inside the cabin, where the prototype had an all-digital instrument cluster depicting the 7 Series. It’s an obvious sign the test vehicle did not have the model-appropriate software, but even so the images come to show what to expect from the production-ready X7.

BMW will unveil its SUV range topper before the end of the year and could add another X model at the top of the food chain as early as 2020 when an X8 will allegedly be launched.