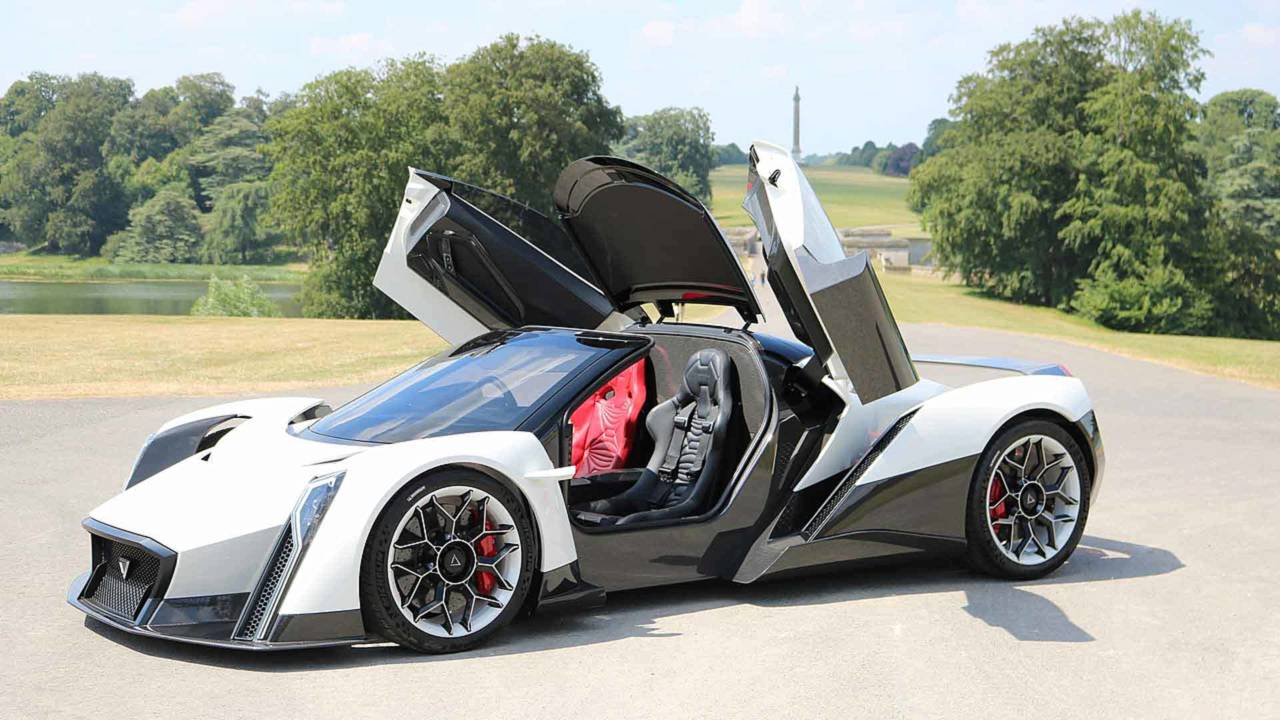 The Dendrobium D-1 electric hypercar concept originally debuted at the 2017 Geneva Motor Show with a futuristic design and promises of insane performance. After going quiet for a while, the automaker now announces plans to build a production version in the United Kingdom, and the firm claims that the machine makes an unfathomable 1,800 bhp and 1,475 pound-feet of torque. Dendrobium intends to reveal details about the range and rapid charge time later. Folks in England can take a better look at the D-1 at the upcoming Salon Privé show at Blenheim Palace from August 30 to September 1.

Get The Full Scoop On The Dendrobium D-1:

Development of the D-1 is still underway, but Dendrobium Automotive is targeting a weight of 1,750 kilograms. The entire body would be carbon fibre, and it uses what the firm calls a Protocellcarbon tub. The machine also features bizarre doors that open up and outward in what the automaker calls a Bio-Aerial Locomotion design. The layout takes inspiration from the shape of dendrobium orchid that's native to Singapore.

Dendrobium doesn't offer any performance benchmarks, but info from the debut at Geneva puts the benchmarks at reaching 60 miles per hour in 2.7 seconds and the ability to hit over 200 mph.

'Using the very latest technology, we are developing, what will be, the most impressive all-electric hypercar. We are designing our own in-house all-electric powertrain and we plan to use our own power storage cells moving to Solid State as and when the technology is reliable and financially viable,' Nigel Gordon-Stewart is Chairman and CEO of Dendrobium Automotive Limited said in the announcement of production in the UK.

Vanda Electrics, a firm from Singapore, came up with the design for the D-1 in the mid-1990s, but the machine didn't make the transition to three dimensions until 2016 when Williams Advanced Engineering created the show car that went on display at the Geneva Motor Show.

After the highly successful international introduction at the Geneva International Motor Show in 2017 and subsequent presentations throughout Europe and the Far East, the Dendrobium D-1 electric hypercar has taken its next steps towards production with an all new company, Dendrobium Automotive Limited, now established in the UK. The Dendrobium D-1 will be officially presented in public for the first time in the UK at Salon Privé which takes place in the grounds of ‘Britain’s Greatest Palace’, Blenheim Palace from Thursday 30th August – Saturday 1st September.

The Dendrobium D-1 was originally a basic electric hypercar design concept, created in the mid-1990s, by Vanda Electrics, a Singaporean product design company. In 2016 the sketched designs were presented to UK engineering and Formula 1™ company, Williams Advanced Engineering with a brief for them to create a working show car integrating many features of the car which would appear on the production version to be presented at Geneva. A uniquely qualified management team has now been recruited to take the Dendrobium D-1 into its next phase of development.

Nigel Gordon-Stewart is Chairman and CEO of Dendrobium Automotive Limited. Gordon-Stewart has been working in the premium and supercar markets since 1989. He is best known for pioneering the sales and marketing of the McLaren F1 and subsequently as Sales & Marketing Director of Automobili Lamborghini SpA reintroducing the Super Veloce brand with the Diablo SV and SVR. He was later an Associate Director to the Board at Group Lotus Plc among other senior roles.

“Dendrobium Automotive is one of the most exciting businesses I’ve ever been involved with.” commented Gordon-Stewart. “Using the very latest technology, we are developing, what will be, the most impressive all-electric hypercar. We are designing our own in-house all-electric power train and we plan to use our own power storage cells moving to Solid State as and when the technology is reliable and financially viable. We are developing unique cabling and connector systems as well as our own complete vehicle integration and ADAS hardware and software. From a technical perspective, the D-1 will be a British engineering tour-de-force.”

The headline specification targets of the D-1 are as impressive as you’d expect from a hypercar in this sector: 1,800 bhp; 2,000 NM and a target weight of 1,750 kgs yet it must represent the true feel of a supercar, not big and heavy. Performance will be very impressive and as linear as possible in its delivery, re-writing the rules for the experience of hypercar ownership. “The car is all carbon fibre, advanced composites and alloys which are superlight and super strong.” stated Jens Sverdrup, Member of the Board of Dendrobium Automotive Limited. Sverdrup has a highly successful background in the supercar industry having worked with Lamborghini, Ferrari and Pagani but is best known for establishing the Koenigsegg brand on the map to the extent that it’s now one of the most desirable and highly valued brands in the supercar sector. Recently he’s been responsible for raising Rimac Automobili’s profile globally. “The construction of the D-1 is based on a unique Protocellcarbon tub which possesses future adaptability for further generations of Dendrobium e-performance cars. Apart from advanced vehicle technology, the D-1 has enormous drama and presence thanks to our unique Bio-Aerial Locomotion door and roof opening system which was inspired by the Dendrobium name. A lot more details will be revealed over the coming months, not the least of which will be the D-1’s impressive range and rapid charge time. You can be assured that the Dendrobium brand will become synonymous with the most exciting and technically sophisticated e-hypercars on the market and available globally.”

“Although all the Dendrobium team has automotive blood running in their veins, we are essentially a technology company developing ultra-performance EV and PHEV cars, systems and components,” continued Gordon-Stewart. “Our Advisory Board is chaired by Michael Kimberley who created Lotus Engineering back in 1978 with Colin Chapman which has provided engineering consultancy and technology services throughout the automotive industry with clients from Toyota to Aston Martin. We want to be part of Britain’s resurgence of technology development and best quality manufacturing because the very high standard of British engineering and manufacturing is still highly respected worldwide. It’s one of the things that sets the UK apart and nowhere more so than in performance automotive engineering, technology and motorsport. We see very exciting times ahead with Dendrobium Automotive.

“We chose Salon Privé for our debut because of the sheer prestige of the event and the ability to engage one-to-one with potential clients, key industry figures and business people” said Gordon-Stewart. ”Blenheim Palace is the perfect location for us being right in the heartland of automotive and motorsports technology in the UK so easily accessible for all guests. His Grace, The Duke, is very enthusiastic about the automotive industry here in the UK and his support for Salon Privé is very evident. We’re very much looking forward to 30th August.”