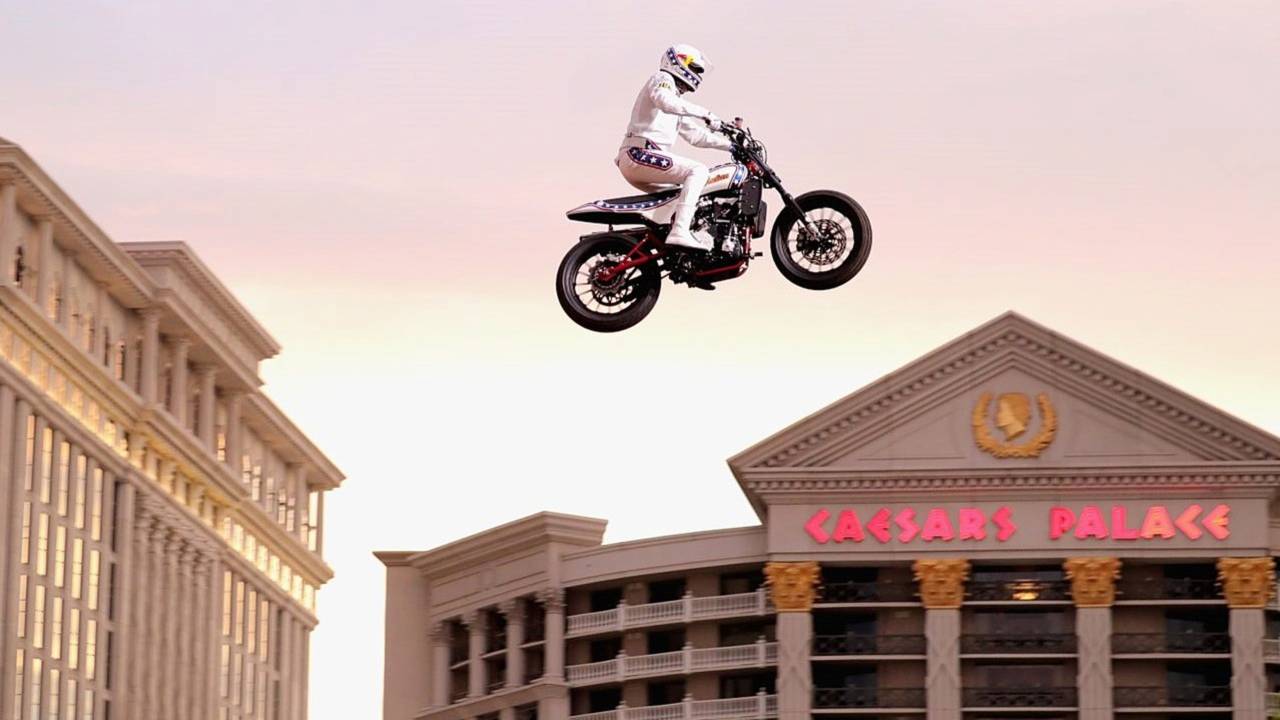 Travis Pastrana has made history by completing three of Evel Knievel’s most iconic jumps.

The first two jumps bettered Knievel’s numbers – the daredevil jumped 50 stacked cars in 1973, and 14 Greyhound busses in 1975 in a jump that followed a similar but unsuccessful attempt in London five months earlier which left him on the brink of retirement.

Headlining the event was the Caesars Palace jump. Knievel’s attempt was arguably his most famous stunt, but the event left him fighting for his life after a botched landing.

While the Caesars fountain jump has been completed since, notably by Knievel’s son Robbie in 1989 (22 years after his father’s attempt), nobody has ever successfully completed the jump on a heavy flat track, V-twin bike; with others instead choosing to use much more suitable dirt and motocross bikes. Pastrana’s bike was an Indian Scout FTR750, which weighs in at around 154kg.

Prior to the event Pastrana couldn’t even perform practice jumps on the Indian due to its unsuitability, instead he reportedly practiced on his usual dirt bike.

Pastrana made his way to Caesars – from the site of the second jump behind Planet Hollywood Resort & Casino – on his jump bike under police escort, performing burnouts and wheelies, and even pulling over to high-five fans during the ride over.

After having the luxury of big run-ups for the car and bus jumps, Pastrana only had an approach of just under 61 metres at Caesars – half of the other two, adding an extra level of intrigue to the jump which was actually both shorter and lower than the other two stunts, but deemed the most technical and the most dangerous.

Pastrana made a speed run on the short lead up to the ramp at Caesars Palace, something that was unexpected given the tiny amount of space available. Then, after giving the nod, Pastrana went for the jump.

With the short run-up, Pastrana began his approach in second gear, spinning up to 10,00rpm before setting off, to negate the effect of such a short approach to the ramp. In the end, the take-off, flight, and landing was textbook, completing a historic night and completing a stunt that Knievel failed to complete 50 years previous.

To celebrate, Pastrana leapt into the fountain he flew over moments beforehand.

Next up for Pastrana is a comparatively tame rallycross outing, where he will be making his Americas Rallycross debut for Subaru Rally Team USA at Circuit of the Americas.

The multiple X Games medallist and US rally champion will also be appearing in the UK later this year on the Nitro Circus Live tour. The action sports show will be making stops at Birmingham, Glasgow, Manchester, and London in November before heading out across continental Europe.

Check out our full gallery of images from Evel Live below: