This crazy custom Holden FB was built from five cars

If you think the front looks like the back, you're not wrong.

Once again, we’re forced to ask a very important question for car lovers everywhere. If you have the ability to build a crazy bespoke car, does that mean you should? When it comes to our friends in Australia, the answer generally is a great big yes.

In regards to this project, we will leave that final verdict up to you, our UK Motor1.com readers. What we will say is that a tremendous amount of design, fabrication, and straight-up automotive passion went into this one-of-a-kind build, presented by Inside Garage both on YouTube and Facebook. It’s based on a 1961 FB Holden – Australia’s version of a classic late '50’s Chevy –  and yes, it was made using no less than five cars.

Specifically, the autos under the knife were two early-1960s Holden FBs, two Nissan R33 Skylines, and a VN-era Holden Calais that was produced in Australia from 1988 through 1991. The result is called the Tail Spin 61 FB Holden, because in case you haven’t figured it out yet, the back of the car is up front and vice versa.

We’re only given the first names for the architects of this mad scientist creation – Kylie and her husband Adam who hail from Kambah, not far from Canberra in southeast Australia. They were looking to build something different, and came upon a design of this car in a magazine. We will give them credit – this is certainly, well, very different with its back-to-front 1960’s style topped with a modern roof.

Check out these cool custom creations: 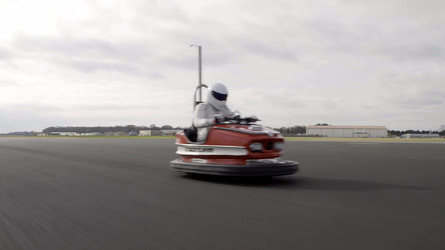 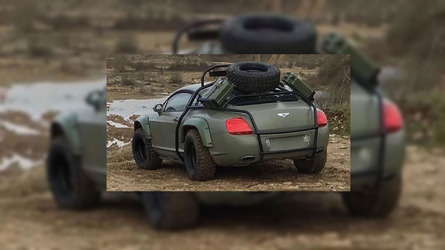 The core remains true to the 1961 FB, but the roof comes from the aforementioned Nissan Skyline. Under the bonnet is a 5.0-litre Holden V8, with the VN Calais offering up its driveline to the cause. It’s riding on disc brakes all around, and the custom interior is a blend of the Holden’s original dash molded to fit the revamped roof, with some modern amenities. All in all it looks like a comfortable place to cruise, as long as you don’t mind lots and lots of red.

This is certainly a build of epic proportions, and according to Inside Garage’s YouTube channel, it’s an award-winning ride as well. We certainly have nothing but respect for the level of work that went into this impressive creation, and whether you love it or hate it, there’s no denying the blood, sweat, and tears that brought it to life. For that, we have nothing but thumbs up all around.