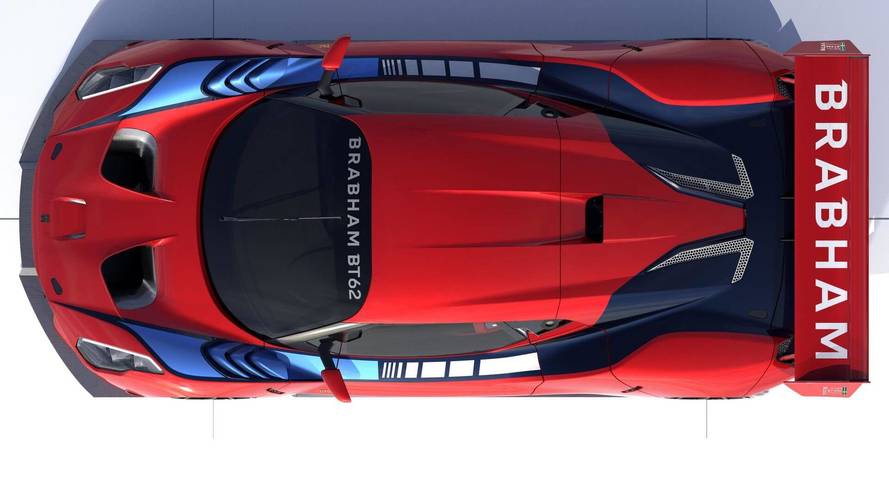 The track-only supercar will be in a livery celebrating an icon.

The Brabham BT62 will make its official dynamic public debut at the Goodwood Festival of Speed later this month.

The track-only supercar costs £1 million and packs a 5.4-litre V8 churning out 700 bhp and 492 lb-ft of torque. It only weighs 972 kg, but has an impressive 1,200 kg of downforce. Michelin tyres adorn every corner, as do F1-grade carbon brakes.

'The Goodwood Festival of Speed is without equal in celebrating all things automotive, and the opportunity to drive the legendary Hillclimb route is amazing,' said Brabham Automotive managing director David Brabham. 'Giving the BT62 its dynamic public debut and returning the Brabham name, with all of its historical significance and racing pedigree, to Goodwood will be an experience I’ll never forget.'

'My father attended the Festival himself many times,' he added, 'and it’s great to continue the tradition of a Brabham driving a Brabham up the hill.'

Brabham name returns to the track with BT62 supercar

Goodwood will also mark the debut of a new red and blue livery for the BT62, representing each of the Brabham team's 35 Grand Prix victories. The Goodwood car celebrates the team's 19th win, which came at the 1978 Swedish Grand Prix and Anderstorp.

The race was the only win – and only race – for the BT46B (above), dubbed the 'Fan Car'. The Fan Car worked by sucking the car to the ground when on throttle, but its superior competitiveness drew the ire of its competitors. As a result, Lotus began to work on a copycat fan version of its 79, but Brabham quickly withdrew the car following its only race, before the FIA had a chance to outlaw it. While the governing body would later outlaw the car, and potential similar ones, it was considered legal at the time it raced so the result stood.