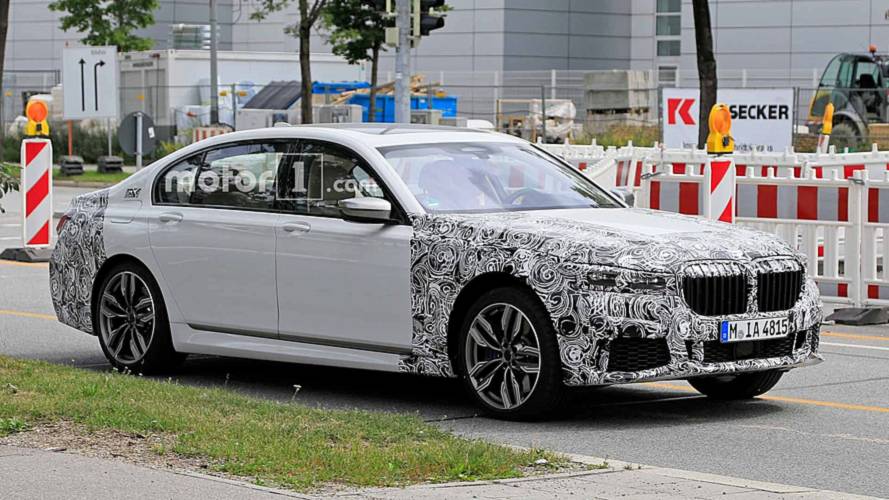 The super saloon's updates make it look more like the upcoming X7.

New spy shots reveal the latest development of the refreshed BMW 7 Series – or Life Cycle Impulse as BMW prefers to call these facelifts. The changes mean a fresh nose and tweaked rump for the big saloon.

By far the biggest overhaul is at the front, where the 7 Series gains a larger grille and narrow headlights that evoke the upcoming X7 SUV. Larger intakes in the lower fascia give the executive transporter a more aggressive appearance, too. The tail gains a slightly different look for the hockey-stick-shaped LED taillights.

While these photos don't reveal the cabin, earlier pictures provide a great view of the interior. Drivers get a redesigned digital instrument cluster, and there are minor updates to the trim and materials. There's also likely improved driver assistance technology for more advanced semi-autonomous capability.

Updated powertrain details aren't yet known, but there are definitely changes on the way. Europe's new Worldwide Harmonized Light Vehicle Test Procedure means that BMW's engineers need to tweak the 7 Series' petrol-fueled engines to make them comply with the new regulations – a process that could take about a year. Among the development team's tasks, the powertrain requires revising the exhaust to fit an Otto Particulate Filter. How these adjustments might affect the powerplants' output isn't yet known, but a rumour suggests horsepower could actually increase for some of the mills.

BMW will reportedly unveil the updated 7 Series before the end of the year. Production will begin in March 2019, so wealthy buyers in Europe will likely be able to get the new saloon early next spring. Sales in North America reportedly commence for the 2020 model year, suggesting a start of sales in the latter half of 2019.