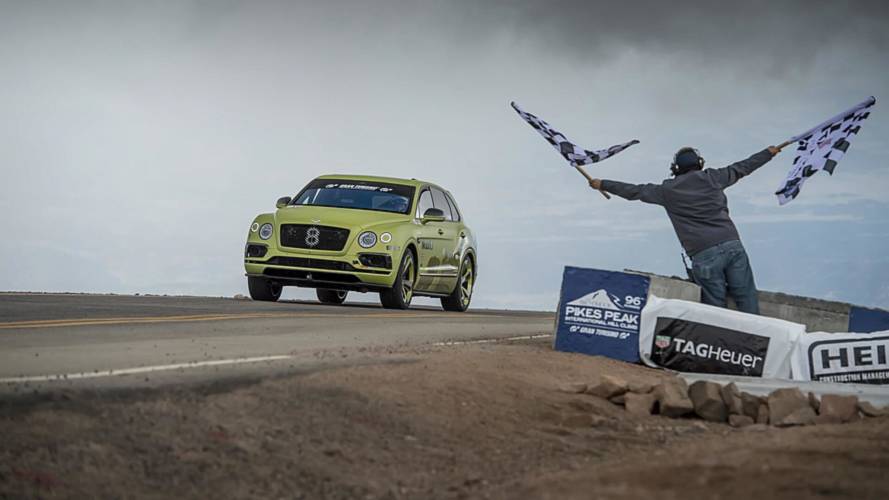 In 2014, Paul Dallenbach drove a Range Rover Sport to a Pikes Peak record for SUVs of 12 minutes and 35.6 seconds. As impressive as that performance may have been, Rhys Millen behind the wheel of a nearly standard Bentley Bentayga just managed to obliterate the record by completing the challenging 12.42-mile course in just 10:49.9. While going up almost 5,000 feet (1,524 meters) and tackling no less than 156 corners, the W12-powered SUV averaged an impressive 66.5 mph.

Preparing the Bentayga for the Pikes Peak did require some minor modifications to the speedy luxobarge, such as getting rid of the rear seats while replacing the front ones with lightweight race-spec seats. In order to be eligible to participate in the The Race to the Clouds, the opulent SUV was also fitted with a roll cage and a fire suppression system. Other changes included a production-spec Akrapovic sports exhaust and a specific type of Pirelli tyres. But other than that, Bentley wishes to point out the rest of the Bentayga was entirely standard.

It’s safe to say the luxury marque from Crewe must’ve been pretty confident in the Bentayga’s ability to set a new record for SUVs at Pikes Peak considering it’s already unveiling a special edition to celebrate the attempt. Surely this was prepared beforehand as Bentley has released images, details, and even a launch date.

Available on order in Europe and the United States from August, the Pikes Peak Bentayga will be offered strictly in 10 examples pampered by the company’s bespoke division Mulliner. The fancy SUV comes painted in either Deep Beluga Black or Radium to mimic the race car. It sits on 22-inch wheels featuring a two-tone look and eschews the chrome accents for glossy black surfaces as part of the Black Specification package included with the limited-run model. To drive the point home, a Pikes Peak logo proudly sits on the front wings.

The Pikes Peak Bentayga features an assortment of upgrades on the inside where Mulliner decided to go with Beluga leather, Alcantara inserts, and Key Lime accents. Rounding off the changes are the individually numbered treadplates and a map of the hill climb on the carbon fibre panel of the dashboard.

Pricing details have not been disclosed, but we do know the Pikes Peak Bentayga uses the standard biturbo 6.0-litre W12 engine hooked up to the same eight-speed ZF automatic transmission and four-wheel drive. As standard, the limited edition bundles the sports exhaust system and the Touring Specification pack.

(Crewe, 25 June 2018) The Bentley Bentayga has again demonstrated its outstanding performance credentials by claiming the outright record for a production SUV at the Pikes Peak International Hill Climb.

Bentley’s Member of the Board for Sales & Marketing, Chris Craft, comments:

“This record proves the outstanding dynamic ability of the Bentayga – demonstrating again how Bentley Motors is the only automotive company in the world that can combine pinnacle luxury and breath-taking performance. Congratulations to all at Bentley Motorsport and to Rhys Millen and his team.”

“What an incredible machine. To take a luxury SUV with minimal modifications and be able to drive up this course in under 11 minutes is a huge testament to the performance and level of engineering in the Bentayga. I had a great run – the car was planted all the way up and gave me the confidence I needed to push hard. I’m delighted to take the SUV record for Bentley and for everyone that’s been involved in this project.”

Only minimal changes were made to a standard production Bentayga in order to comply with the rules. The front seats were replaced with racing versions while the rear seats were removed, and a roll cage and fire suppression system were installed. Tyres were selected from Pirelli’s DOT-marked range, and a production-specification Akrapovic sports exhaust was fitted. In every other way, the Pikes Peak car is a standard Bentayga, finished in eye-catching Radium Satin paintwork accented by the all-black chrome and carbon fibre body kit provided by Bentley’s Black Specification.

To celebrate the record-breaking run, Bentley is today announcing a new Limited Edition Bentayga, strictly limited to just ten cars. Created and handcrafted by Mulliner - Bentley’s in-house bespoke and coachbuilding division – the Pikes Peak Bentayga is an homage to the achievements of the Bentayga W12 on the mountain.

The Pikes Peak Bentayga features of number of eye-catching elements. The exterior is finished either in deep Beluga black paint or striking Radium, with 22” wheels in a bespoke two-tone finish of Beluga with Radium accents. The Black Specification is included, replacing all exterior chrome with gloss black components and adding a carbon fibre splitter, side skirts, diffuser and rear spoiler. A subtle Pikes Peak motif adorns the front fenders.

Inside the car, a Mulliner Design Colour Split marries Key Lime accents with Beluga leather, with Alcantara inserts to the seats and doors. The steering wheel and gear lever are also trimmed in Alcantara, and the headlining is technical Eliade cloth. A Pikes Peak logo decorates the carbon fibre fascias, and numbered Pikes Peak treadplates complete the interior.

The Pikes Peak Bentayga will be available to order from August for customers in the US and Europe.