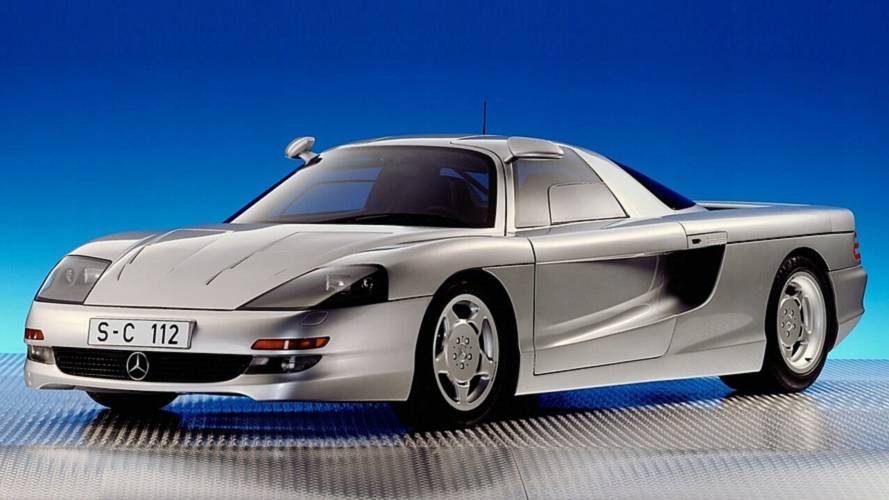 The mid-engined V12 supercar with gullwing doors took the shape of a road-going Group C machine with active aerodynamics.

Ushering in many technological breakthroughs for Mercedes, the C 112 is an important concept. Its juicy specs are also worthy of our attention, as is the great design with those spectacular gullwing doors.

Following a quartet of C 111 concepts that should be familiar to fans of the three-pointed star, 1991 saw the return of the gullwing doors for another concept that hasn’t withstood the test of time as well. Envisioned as a road-going buddy of the Sauber-Mercedes C 11 Group C race car, the concept was quite interesting from many points of view.

For starters, the C 112 was Mercedes’ very first car to benefit from the active suspension system dubbed 'Active Body Control,' which went on to debut in a production model in 1999 with the CL-Class (C125). The supercar came with a combination of spring and hydraulic servo cylinder for each wheel to form the active suspension smart enough to adjust itself based on the data gathered by the sensors. Back then, Mercedes said the setup offered the concept an 'unprecedented level of stable roadholding' further enhanced by the implementation of rear-wheel steering.

Active aero is not that uncommon nowadays on high-end sports cars, but back in the early 1990s, it was a rare feature. The C 112 was engineered with a fully adjustable front and rear spoiler, with the latter remaining inactive during normal driving and extending at higher speeds as well as when going fast through the corners.

The rear spoiler was also developed to improve hard braking by going up into the wind like a sail when coming to a full stop from high speeds. This actively controlled aerofoil at the back doubling as an air brake was seen in a production car some 12 years after the concept, in the 2003 SLR McLaren.

Another important novelty was the intelligent cruise control system that later evolved to become Distronic in the 1998 S-Class (W220). The concept’s electronic tire pressure monitoring system was adopted in 1999 by the aforementioned CL.

Beyond the tech it offered, the C 112 was a proper supercar packing a mid-mounted 6.0-litre V12 with 408bhp and 428 pound-feet of torque. It was enough to enable the concept reach a top speed in excess of 186mph after hitting 62 mph in just 4.9 seconds.

The C 112 never made it to production, even though individual buyers did get in touch with Mercedes to try and buy one. The company attempted to find a way to build the supercar with help from Sauber, but ultimately the project was sadly canned.