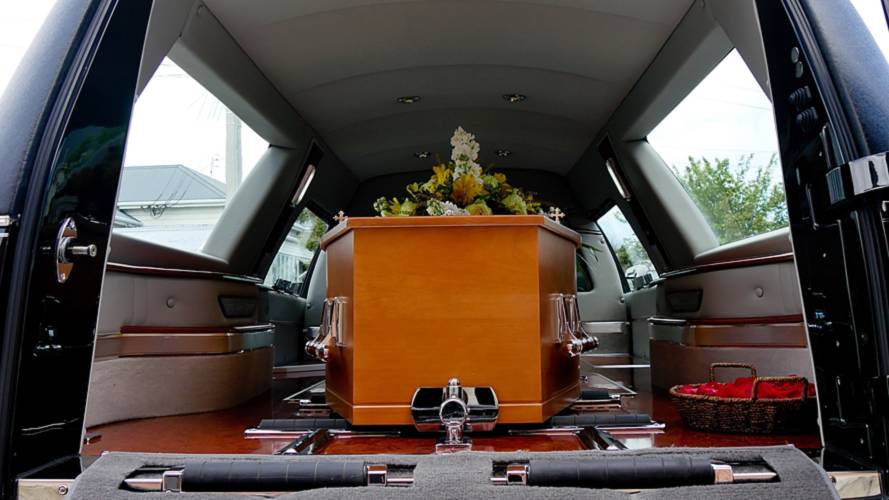 Witnesses in Cambridge say that three men in suits parked up their hearse and had a fry-up.

Funeral workers in Cambridge are under fire after they were accused of parking up their hearse with a body inside and stopping for a cooked breakfast.

The funeral car had a coffin inside with flowers on top while it was left by the side of the road in more than 20-degree heat. The three suit-wearing occupants of the car are said to have parked up the hearse and made their way to a cafe three doors away.

The vehicle was left outside a local carpet shop, and one of the carpet fitters went to confront the workers.

Martin Grass of Chesterton Carpets, said: ‘I told them it was a bloody disgrace. They had left a family's deceased relative in a lay-by on full public display. They told me they had the right to eat, but in my view they had no respect. If that was my family member, I would have been disgusted.’

Maserati Ghibli hearse is an elegant way into the afterlife

Another worker told reporters that he had been disgusted: ‘Somebody’s mum or sister is on their final journey to their resting place. They’ve been left by themselves and none of the family know the fun­eral staff have left her in a lay-by to go and get their breakfast. There was definitely somebody in there because I could see a picture of the deceased on top of the coffin. It’s just sick.’

Following the confrontation, the men moved the car further down the road, where a local hairdresser told the Daily Mail that the men had got out to sit on a bench and have a smoke before speeding off, still with the body inside.

Although we have no reason to suspect this particular event, in February 2010, images of a hearse being towed away by council workers went viral around the world, but what people didn’t know was that the scene was set up for a BBC2 comedy series set in East London.