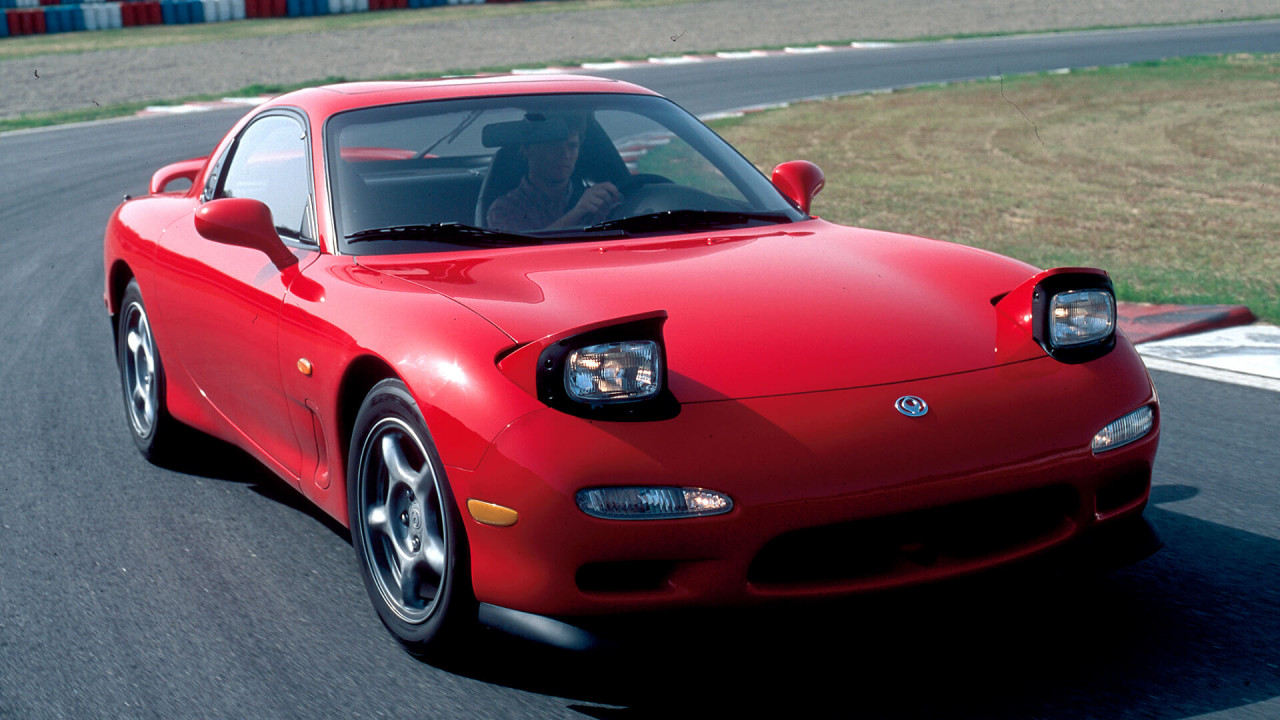 There's not much better than driving an immaculate RX-7 on picturesque German roads.

Japanese automakers had been making sports cars for decades by the beginning of the 1990s, including great ones like the Datsun 240Z. However, something finally clicked in these years because vehicles like the Acura NSX were on par or even better than the best that Europe had to offer. The third-generation Mazda RX-7 (known by fans as the FD because of the FD3S chassis code) was among this cadre of amazing Japanese machines, and Motor1.com's team in Germany recently got the opportunity to drive an exquisitely preserved example from the Mazda Museum in Augsburg, Germany. The chance came from the Mazda Classic Challenge where the automaker threw open the doors to this collection and let some lucky journalists experience the models on the road.

The RX-7 hit the market in Japan in 1978. At the time, Mazda offered many of its models with a rotary or more traditional engine with pistons. The RX-7 was something of a halo product for the brand, though, and Kenichi Yamamato, the company's head of research and development who championed rotary develop, made sure that the sports coupe had a Wankel under the hood.

BBR's 210bhp upgrade is the MX-5 we need right now

The RX-7 arrived in the United States for the 1979 model year and proved to be a huge success. Europeans didn't snap them up quite so readily, according to our German colleagues. It took until the introduction of the third-generation version in 1991 for buyers there to really start to take notice of the rotary-powered machine.

The FD featured a curvaceous body from the pens of the designers at Mazda's design studio in Irvine, California. It has a gorgeously moulded shape, and even the large rear spoiler incorporates beautifully into the rear, rather than looking like an afterthought. Looking closely, you begin to notice subtle similarities to the first-gen MX-5. The kinship makes sense because of Tom Matano's role in developing the design for both cars.

At first glance, the FD looks larger than it actually is at 169 inches long, 69 inches wide, and 48.4 inches tall. However, you really notice the low ride height when snaking into the deep seat. It's not a great fit for tall folks, and the steering wheel only tilts – it doesn't telescope – which makes the situation worse. Our driver had a six-foot seven-inch passenger with him who had an even harder time cramming into the cabin.

Even though our driver's head practically scraped the sunroof, he began getting a feel for the RX-7 after a short time on the road. A flat, aluminium hood allows for a great view out of the windscreen, and the instrument panel is akin to a Porsche with the tachometer in the middle of the instrument pods. Another similarity with the machines from Stuttgart is the two-stage Hitachi turbochargers for the 13B-REW engine, similar to the setup on the Porsche 959. In German trim, the setup produces 236bhp and 217 pound-feet of torque. The output is plenty for a machine that weighs 2,870 pounds. It's no wonder from a machine with Takaharu Kobayakawa as the project leader after his command over the squad that won the 24 Hours of Le Mans in 1991.

Kobayakawa's goal with the RX-7 was to create a vehicle with the performance of the Acura NSX but at half the cost. He ended up creating a vehicle that could challenge the best of Europe, too. With acceleration to 62 miles per hour in 5.3 seconds, the FD was quicker than a Ferrari 348 and Porsche 911 Carrera 2. At 85,000 Deutsche Marks (today around £38,500 or €44,000), the Mazda's price undercut competitors, although still wasn't cheap.

It's too bad that more people don't get to enjoy driving an FD RX-7. The five-speed gearbox has short throws ideal for quick shifts. The Wankel doesn't like running at low revs, so it's best to work the gearbox to keep up the rpms. While cruising through picturesque villages around Augsburg the ride is relaxed, but you can provoke the tail to step out easily with a quick turn of the steering wheel.

Don't get the impression the RX-7 is soft, though. When the German roads become empty, it's possible to push the FD harder. At higher revs, the high-frequency sound of the turbos mixes with the engine's bass. The second turbo kicks in above 4,000 rpm, and max torque arrives at 5,000 rpm. Keep your foot on the throttle, and there's an audible warning at 7,000 revs to advise the driver that it's time to shift.

Winding country roads are the ideal environment for the FD. There, it demonstrates the strengths of the independent suspension and ventilated disc brakes. The 50:50 weight distribution helps, too. As if on rails, the RX-7 drives around the corner and becomes a precision tool in the hands of a connoisseur.

Few German ever got to experience the FD, though. It launched there in 1992, and Mazda only tallied around 300 sales a year until the company axed the RX-7 there in 1996. Production continued in Japan until 2002, and the company introduced increasingly hardcore versions there with claimed outputs as high as 276bhp.

The FD RX-7 remains a high water mark in Mazda's history. It's followup, the RX-8 was nice but the move towards a somewhat softer vehicle with four seats and weird, clamshell doors wasn't what many fans were looking for. Since then, the rotary engine has been dead within Mazda. A return is kinda on the way by using the Wankel as a range-extender for a hybrid model, but this isn't what enthusiasts really want from a revived rotary. Meanwhile, we can always dream that the gorgeous RX-Vision Concept sees production someday, but the chances don't look good.