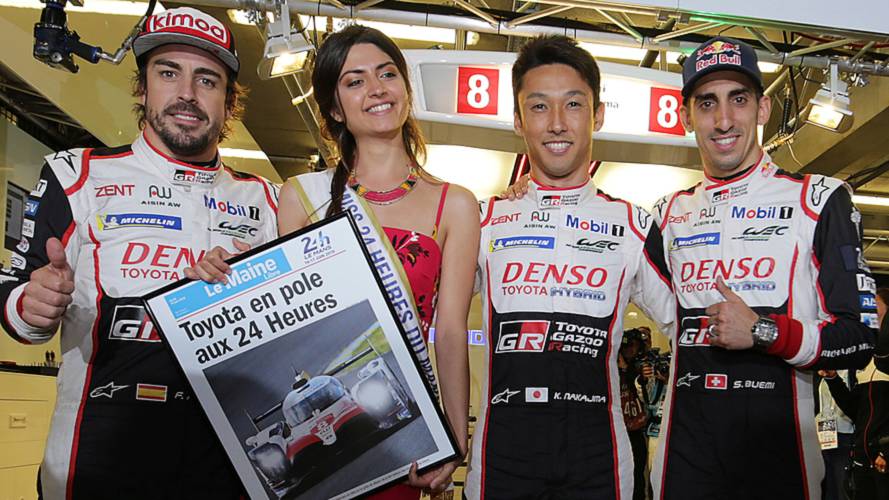 The #8 Toyota of Kazuki Nakajima, Sebastien Buemi and Fernando Alonso will start the Le Mans 24 Hours from pole as the Japanese manufacturer locked out the front row.

Nakajima, who had set the initial qualifying benchmark of 3m17.270s in Wednesday's first session, blitzed his previous best by close to two seconds with his first flying lap in the final part of qualifying on Thursday evening.

That effort was less than six tenths slower than Kamui Kobayashi's record 3m14.791s lap from 2017, which was set in far more favourable weather than the overcast and drizzly conditions that were a factor for much of the final part of qualifying.

"It was more or less at the maximum with no traffic, so I can't complain," said Nakajima. "The track conditions were much better than yesterday and the lap was more or less as we expected. I was pushing hard to try to beat [Kobayashi's] record, so maybe I could have done better in places."

Nakajima's lap and the failure of any driver in the #7 Toyota to improve on Kobayashi's fastest lap means the #8 he will share with Formula E frontrunner Buemi and two-time Formula 1 world champion Alonso ended up securing pole by exactly two seconds.

Improvements from both Rebellions at the start of the final two-hour session looked to have secured the leading privateer outfit a second-row lockout, only for the faster #3 car to have its time removed.

Thomas Laurent set a time 0.875s slower than the second Toyota, but that lap was one of a number removed by officials after the session had ended as a result of Laurent missing the scrutineering light in the pitlane.

Stephane Sarrazin's 3m19.483s lap set in Wednesday's first qualifying session remained the #17 SMP car's fastest time, which was enough to split the two Rebellions after the #3's time was removed.

It also made it the fastest BR1 by 1.6s over the DragonSpeed entry that qualified sixth.

The #11 SMP car shared by Vitaly Petrov, Mikhail Aleshin and 2009 F1 champion Jenson Button was a further three tenths back and will start seventh courtesy of Petrov's fastest time, ahead of the sole ByKolles entry. 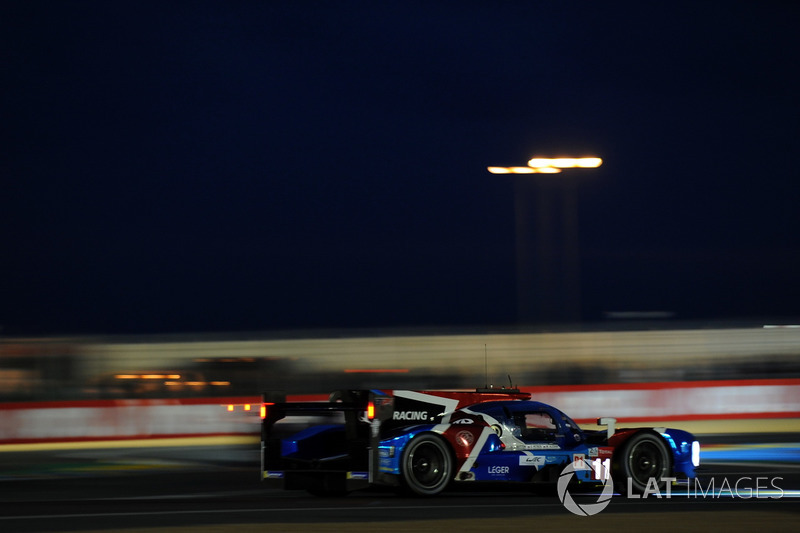 Tom Dillmann had set a lap below the 3m21s barrier on Wednesday evening that would have given the ENSO CLM P1/01-Nissan sixth on the grid, but that time was disallowed for excessive fuel consumption.

The two Manor Ginettas were ninth and 10th fastest on best times at the end of the session before the #5 car had its time removed for the same scrutineering infringement as the #3 Rebellion.

Alex Brundle had dragged the #6 car up to ninth in Thursday's earlier qualifying session, and the car eventually ended up with a fastest time of 3m23.757s that left it 8.380s off the ultimate pace and a little more than a second off the next slowest car.

Leo Roussel had hoisted the sister car just over a second behind the #6, but it the dropped to 14th in the classification behind four LMP2 cars when its fastest time was removed.

Chatin's time of 3m24.842s had been shaded by 2013 event winner Loic Duval in the #28 TDS car, only for the stewards' intervention to bump the car he shared with Matthieu Vaxiviere and Francois Perrodo back to fourth.

Chatin also claimed a new record for the fastest-ever LMP2 lap of Le Mans, a little over half a second faster than last year's pole time set by Alex Lynn.

The 2014 European Le Mans Series champion shaved a tenth off his Wednesday benchmark in the session's opening runs, which proved enough to keep the IDEC car ahead of Nathanael Berthon's #31 DragonSpeed Oreca, also running on Michelins, by just 0.041s. 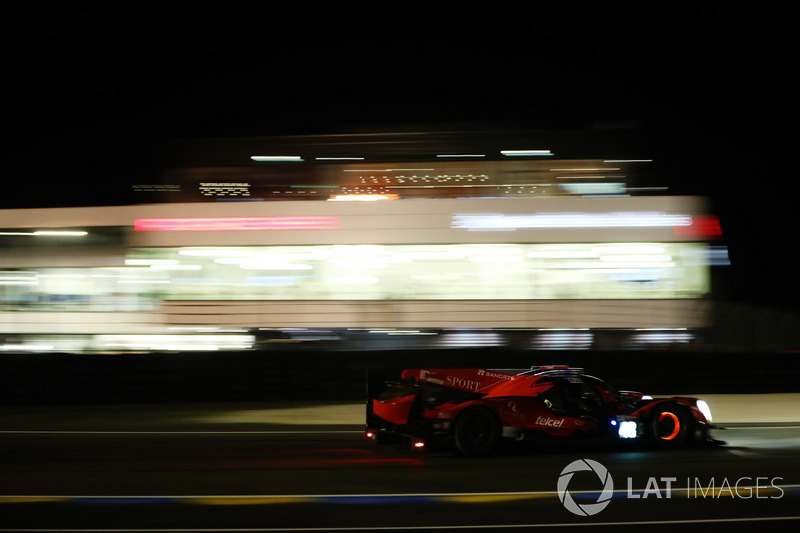 Jean-Eric Vergne also lapped under last year's pole time in the #26 G-Drive Racing Oreca, but was only fourth quickest until the sister TDS car's time was wiped, promoting him to third, albeit a further three tenths behind Chatin in the best of the Dunlop-shod cars.

Duval's 3m25.240s from first qualifying on Wednesday was good enough for fourth, while the top five was completed by Will Stevens in the best of the Ligiers entered by Panis-Barthez Competition, another car running on Michelins.

The #47 Villorba Corse Dallara did not re-emerge after a suspension failure caused Giorgio Sernagiotto to crash heavily and bring out the red flags in qualifying two.

The top three in class remained unchanged from first qualifying, with the #91 Porsche 911 RSR leading the sister #92 Manthey-run car and the best of the Ganassi-run Ford GTs, the #66. 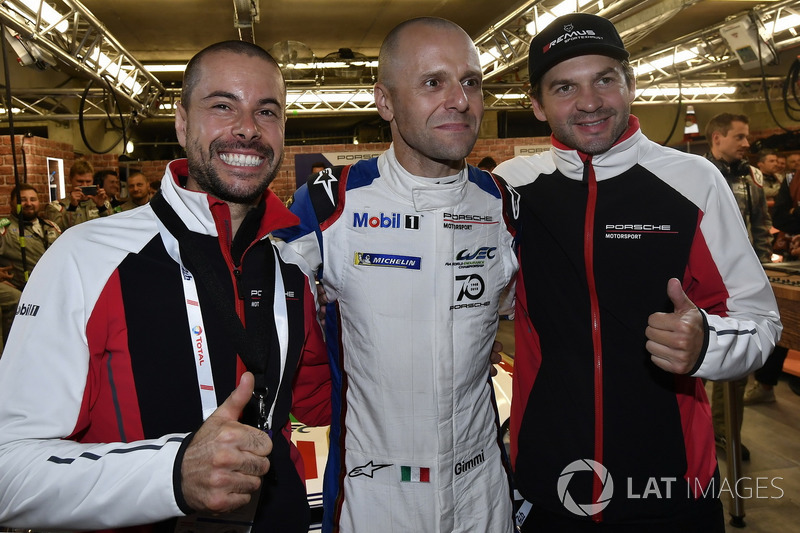 Alessandro Pier Guidi promoted the #51 Ferrari 488 GTE Evo to fourth in the final session with a time of 3m49.494s, demoting the #68 Ford to fifth and denying the Blue Oval a lockout of the second row.

The best of the CORE autosport-run IMSA Porsches also improved in the hands of Patrick Pilet to take sixth, while Richard Westbrook lifted the #69 Ford up to seventh ahead of the #94 Porsche, which didn’t improve from Wednesday.

Completing the top 10 were the best of the Corvette C7.Rs, the #63 car of Antonio Garcia, and the second AF Corse Ferrari, whose best time was set by Sam Bird.

BMW’s pair of MTEK-run M8 GTEs slipped down to 12th and 13th places, while Aston Martin’s new Vantage GTEs failed to improve on their Wednesday times and will start 16th and 17th in class.

Porsche locked out the top three places in GTE Am, with Matteo Cairoli’s lap from first qualifying in the #88 Dempsey-Proton car proving enough for class pole.

Ben Barker put the #86 Gulf Racing machine up to second with a time 0.663s shy of Cairoli and some six tenths up on the second of Dempsey-Proton cars.

The #54 Spirit of Race Ferrari that had been third pre-session fell to fourth place, its best time having been set by ex-F1 star Giancarlo Fisichella in second qualifying.