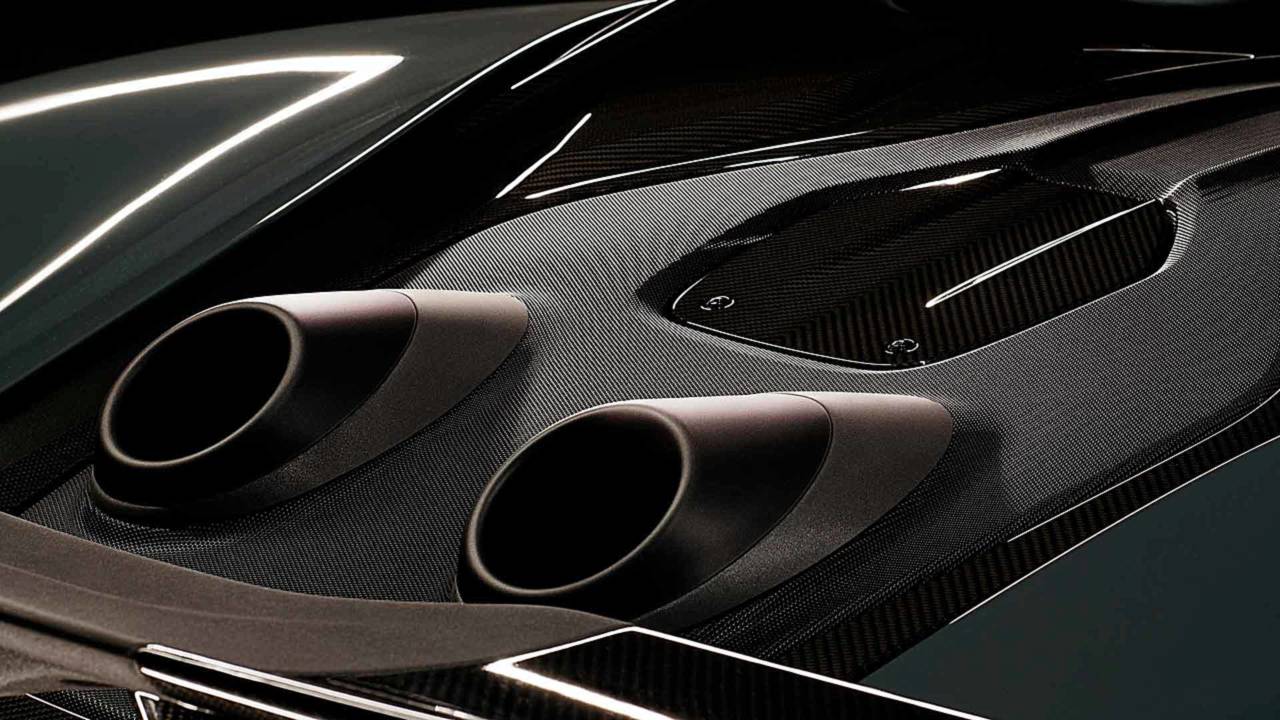 This is our second chance to glimpse this mystery machine, and it's looking even more interesting.

McLaren has a new teaser for its mysterious model, and the evidence continues to hint that this might be a 570LT. The wait for the answer to the conundrum of this vehicle's identity will end on June 28 when the online unveiling will finally occur. The public will get to see the machine in public for the first time at the Goodwood Festival of Speed in July where it will drive up the event's famous hill climb.

The latest teaser reveals a pair of exhausts emerging from the vehicle's rear deck, and there's a whole lot of carbon fibre for the bodywork surrounding the pipes. The image below offers a chance to compare against how the tail of a standard 570S looks.

The images so far indicate that the mystery vehicle uses McLaren's entry-level Sport Series as a starting point, and the announcement accompanying the latest pictures promises that the model benefits 'from increased power, minimised weight, optimised aerodynamics, and enhanced driver engagement.' In addition, McLaren now says that it only plans to build a limited number of these vehicles.

The previous teaser (above) offered McLaren's first glimpse of the upcoming model. The image revealed the model's significantly larger rear diffuser and carbon fibre fascia. It also showed showed that the exhausts were no longer in their normal spot at the corners of the back end.

Rumours indicate that McLaren tunes the existing 3.8-litre biturbo V8 to produce over 600bhp. The MSO division reportedly supplies components like lighter wheels and a titanium exhaust. For fans of topless motoring, there is also allegedly a convertible version on the way eventually, although McLaren's teasers make absolutely no mention of it yet.

McLaren reveals more of new model ahead of Goodwood Festival

 Global public debut in the UK, at the Goodwood Festival of Speed in July

The next new McLaren is just two weeks away from being revealed online ahead of a public debut at
the UK’s 2018 Goodwood Festival of Speed. To keep the world guessing, a second, tantalising
image has been released revealing a pair of formidable top-exit exhausts. This follows the issue last
week of a partial view of its dramatic rear.

The car, which will be driven up the famous Goodwood Hill Climb for the first time on Thursday July
12, will be the fifth model to be announced under McLaren’s Track22 business plan. It will benefit
from increased power, minimised weight, optimised aerodynamics and enhanced driver
engagement. It will also delivertrack-focused dynamics. And like the McLaren Senna, the most
recent model revealed by the Woking-based company, it will be limited to the few.

The wait to learn more will be brief: images of the car will be released online – together with its
name – at 13:00 BST on June 28.

Prior to that, visit cars.mclaren.com/theedgeiscalling to register your interest.