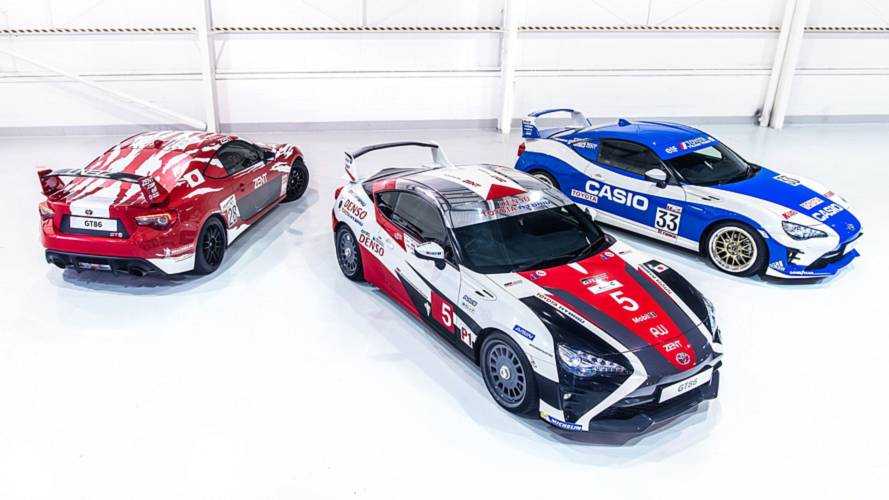 Toyota is celebrating the 85th Le Mans 24-hour race this weekend by reincarnating its most famous racing liveries on three GT86 sports coupes.

Arguably the most recognisable of the three is the white, black and red colour scheme of the ill-fated 2016 TS050 Hybrid, which infamously broke down while leading the final lap, handing victory to the Porsche 919 Hybrid of Marc Lieb, Romain Dumas and Neel Jani.

However, the more colourful designs include the red-and-white of the 1998 TS020 – also known as the GT-One – that beat rivals from higher classes to take second place in qualifying. In the race, mechanical issues hampered the car’s challenge, but it still became a famous name in Le Mans folklore.

The final car wears the blue-and-white livery of the 1992 TS010, which came second behind the Peugeot of Yannick Dalmas and British drivers Derek Warwick and Mark Blundell.

Sadly, that car’s howling V10 hasn’t been implanted into the GT86, but the newcomers are set apart by more than just a livery. Each features Toyota’s optional high-level rear wing, as well as a 40mm drop in ride height and a Milltek exhaust system. Aftermarket alloy wheels have also been fitted, to replicate the original racing wheel designs.

All three vehicles are strict one-offs, but they will join the Toyota heritage fleet and attend events throughout the summer.

Toyota spokesman James Clark said: ‘The GT86 gives us a great canvas on which to pay tribute to some of the amazing Toyota race cars that have thrilled the crowds at Le Mans. Response to our earlier retro-liveried coupes was fantastic and we hope these new cars – all strictly one-off creations – will generate the same kind of enthusiasm as we approach this year’s 24-hour race.’